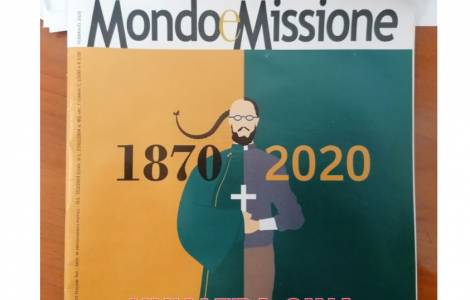 2022-01-05
"Mondo e Missione" looks back on 150 years: the history of the magazine is closely linked to the Pontifical Mission Societies

2021-12-15
Humanitarian corridors from Afghanistan, a way to save lives

2021-12-13
Between cooperation and diplomacy: Christian realities protagonists of the future of Afghanistan

Milan (Agenzia Fides) - In 2022 the missionary magazine "Mondo e Missione", of the Pontifical Institute for Foreign Missions (PIME) looks back on 150 years of uninterrupted publications. As a note sent to Agenzia Fides informs, in April 1872 the first edition of "Le Missioni Cattoliche", as the magazine was called, appeared. "This anniversary", said a message on the anniversary, "seemed not only to be a valuable occasion to celebrate, but also a moment to rediscover together the meaning of what we bring into your homes every month. And we want to ask ourselves what today's context demands of a missionary magazine".
Looking back at its own history, "Mondo e Missione" reminds us that its actual origin is to be found in France and is in some way connected to the history of the Pontifical Mission Societies: In 1872, "The Catholic Missions" were born, in fact, from experience of the weekly bulletin of the same name which - four years earlier in Lyon - the Society for the Propagation of the Faith had begun to publish, the great missionary animation initiative created in 1822 by Pauline Jaricot, who in May will be proclaimed blessed.
For some years now the Society has been publishing the "Annals", that is, the account of the work of the missionaries who preached the Gospel around the world. There were readers who, after reading this booklet, wanted to know more: "They were looking for more detailed information, for more comprehensive and specific knowledge about the countries visited by the missionaries". "It was therefore a curiosity about the world that gave birth to the magazine. And so "Le Missioni Cattoliche" in France, from Asia or Africa, from America or Oceania not only promised to report on the special deeds of the missionaries, but also to report news about their everyday life, their travels, notes on natural history, ethnology, statistics, obituaries and bibliographies", the message continues.
This did not go unnoticed at the Lombard Seminary for Foreign Missions, the Institute founded in 1850 by the will of Monsignor Angelo Ramazzotti, which in 1926 would become PIME.
After the first mission in Papua New Guinea, which ended in 1855 with the martyrdom of Blessed Giovanni Battista Mazzucconi, the number of missionaries was still small, yet "the idea that information about the world was one of the fundamental tasks was already surprisingly clear".
Father Giuseppe Marinoni, the first superior of the Institute in 1864 was one of the founders of the Osservatore Cattolica, a newspaper in Milan.
The Italian edition of "Le Missioni Cattoliche" was above all the work of Father Giacomo Scurati, a missionary who went to China and Hong Kong. Inspired by the desire to report on the world he had come to know, on his return he asked the director of the Society for the Propagation of the Faith, Father Stanislao Laverrière, for permission to be able to translate and distribute in Italy that bulletin that had begun to be published in France. The first issues of the new magazine, which appeared in 1872, were mainly translations from the magazine published in Lyon; but Father Scurati immediately reaffirmed his wish to also "publish news and studies by missionaries of the Italian peninsula, regardless of which institute they belonged to".
"The Catholic Missions" was published from the start with a very broad perspective. Father Scurati remained at the head of the magazine for nearly thirty years, and after him more than 20 editors-in-chief took turns, including Father Paolo Manna, who returned from a mission in Burma and became a great builder of the network of the Pontifical Mission Societies in Italy and to become the founder of the Pontifical Missionary Union, one of the four Papal Societies. Father Manna wanted the creation of "Italia Missionaria", the children's magazine that accompanied "Le Missioni Cattoliche" as a supplement for many years, and of "Venga il tuo Regno", the PIME magazine for families, which until a few years ago was based in Southern Italy.
Finally, in 1969, with Father Gheddo and the season of the Second Vatican Council, the name changed: "Le Missioni Cattoliche" became "Mondo e Missione" and developed an intuition that already anticipated the idea of the "Church that goes forth" dear to Pope Francis.
"To celebrate 150 years means to return to these roots.
In the age of social networks this open view of all human horizons, which has been handed down to us as a precious inheritance from those who wanted PIME to produce information in its evangelizing mission, is becoming more and more important", states the magazine.
Today "Mondo e Missione" is no longer just published in the form of a printed magazine, but also has a Website (www.mondoemissione.it) and social media channels and promotes exhibitions and cultural events. In 2022, "Mondo e Missione" will have a new graphic design, with the mission of "nourishing the heart and the faith", as the pioneers of PIME said 150 years ago. (PA) (Agenzia Fides, 5/1/2022) 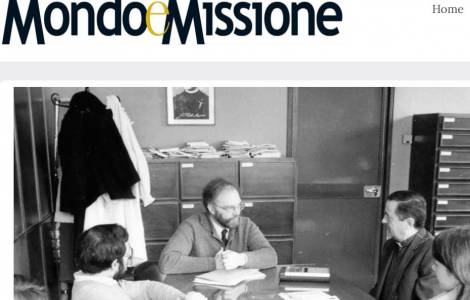