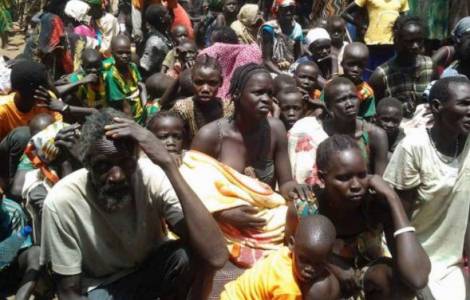 Juba (Agenzia Fides) - The situation in the world's youngest country, which was established in 2011 after independence from Sudan, remains highly uncertain. To the challenges opened by the “Revitalized Agreement for the Resolution of the Conflict in South Sudan” of September 2018, new problems are added such as the continuous tensions in many parts of the country where the population lives in constant fear for their own lives and those of loved ones. The Comboni missionary Elena Balatti, in a note sent to Fides, explains that "there are situations of generalized violence that cause the death of civilians and livestock and there is the continuous use of abuse and contempt for human rights. There are episodes of intercommunity violence with attacks between neighboring populations that become enemies. South Sudan needs to solve its old problems, such as the accumulation of hatred and resentment. South Sudan needs peace".
In this context, the news of the choice of the leadership of the administrative area of Pibor to return hundreds of previously stolen cattle to the Akobo population comes with some relief, in a gesture of goodwill and easing tensions. The news comes as a sign of peace after months of serious clashes between the Nuer ethnic groups from Akobo and the Murle from Pibor. "The return - explains Sister Elena Balatti - is an act of restorative justice that we hope will end a cycle of violence. It is an excellent way to wish everyone a Happy New Year".
In this context, on the sidelines of the visit to Juba, the capital of South Sudan, which took place from December 21 to 23, the Vatican Secretary for Relations with States, Msgr. Paul Richard Gallagher, underlined the "great support for a visit by the Holy Father" to South Sudan and did not rule out the possibility of his trip in the course of 2022. "There is certainly no perfect moment" he added, given the situation of uncertainty and instability that the country has been experiencing for many years now, "but we must move forward in the whole process of discernment".
During the visit, Msgr. Gallagher met the political and religious authorities of the country and held an interview with the President of the Republic, Salva Kiir, to whom he entrusted the continuous interest and closeness of the Holy Father to the people of South Sudan so that peace and stability may soon come. On his part, the president assured the Vatican envoy that he would never lead the country to war again.
It should be noted that the overall picture of South Sudan is aggravated by an unprecedented series of floods. For the third consecutive year since 2019, the country has experienced recurrent floods since last May that affected over 620,000 people in ten different states. The floods caused the destruction of farms and livestock, submerged school buildings, health centers and forced many families to flee. The food insecurity of the population is aggravated by the fact that the delivery of aid has suffered serious delays due to the infrastructures severely damaged by the same floods.
The missionary Sister Elena Balatti informs that, after the serious attack suffered by Father Christian Carlassare, MCCJ, bishop-elect of Rumbek, Catholics are awaiting their official consecration this year, although a date has not yet been determined. (LA) (Agenzia Fides, 4/1/2022)