VATICAN - On January 6, 1622, Pope Gregory XV founded the Congregation “de Propaganda Fide” for the reunification of Christians and the spread of the faith

Monday, 3 January 2022 congregation for the evangelization of peoples 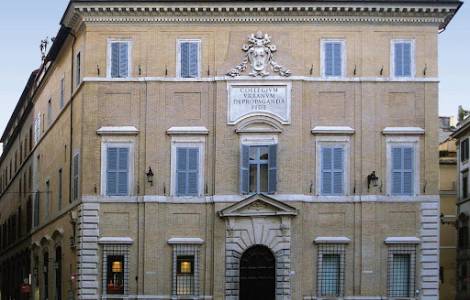 2022-05-20
The charism and proposals of the Pontifical Society of Missionary Childhood: child-friendly experience of ecclesial communion

2022-05-09
On the beatification of Pauline Jaricot: first screening and presentation of the short film "To look from above"

Vatican City (Agenzia Fides) - Four hundred years ago, on the solemnity of the Epiphany of the Lord, on January 6, 1622, Pope Gregory XV founded the Sacred Congregation "de Propaganda Fide" as the supreme organ for the propagation of the faith, assigning it a double purpose: to promote the reunification of Christians and spread the faith among pagans. The new Congregation was made up of 13 Cardinals, two Prelates and a Secretary, Francesco Ingoli, who met for the first session on January 14 at the home of the first Prefect, Antonio Sauli. Among the immediate decisions was that of writing a letter to the Apostolic Nuncios to communicate the news of the new Congregation and to ask them to send a report on the situation of religion in their territories in order to spread the appropriate means for the dissemination of faith.
Three Cardinals - Bandini, Millini and Ubaldini - were entrusted with the task of preparing the Bull for the canonical erection of the Congregation. On June 22, 1622, Pope Gregory XV published the Bull "Inscrutabili divinae Providentiae arcano", in which, starting from the salvation of the world operated by God through the sacrifice of his only son, he affirmed that it was "a duty that we place in all our means, all our efforts, to bring souls to Christ" (cf. W. Henkel, OMI, in Dictionary of Missiology).
The task of the new Congregation was, therefore, to attend to the missionary activity of the Church, in the old and in the new world, with eminently spiritual purposes, abandoning the harmful missionary practice followed until then by the colonial patronages of the European powers and overcoming the particularistic tendencies of the missionary action of religious orders. The Congregation was also recognized for the decision-making power necessary to ensure speed and effectiveness in the great evangelizing commitment. Pope Urban VIII founded the Urban College of Propaganda Fide in 1627, for the formation of the secular clergy for missions, and the Polyglot Printing House, to print documents and texts in the different languages of the peoples.
Over the last 400 years, various interventions by the Magisterium have further defined the tasks and organization of the Missionary Dicastery, which today is called the "Congregation for the Evangelization of Peoples", keeping its fundamental objectives unchanged and adapting them to the evolution of the situation. The Apostolic Constitution "Pastor bonus" of John Paul II confirmed the general principle of jurisdiction, enunciated by the Second Vatican Council (cf. Ad gentes, 29), which states: "It pertains to the Congregation for the Evangelization of Peoples to direct and coordinate throughout the world the actual work of spreading the Gospel as well as missionary cooperation"(85).
Among the main objectives of the Missionary Dicastery are: to ensure an adequate distribution of missionaries; care for the formation of secular clergy and catechists; and entrusting the evangelization of mission territories to institutes, religious societies or particular churches.
According to recent statistics, published on the occasion of World Mission Sunday on October 24, 2021 (see Fides, 21/10/2021), there are today 1,117 ecclesiastical circumscriptions dependent on the Congregation for the Evangelization of Peoples: most of them are located in Africa (517) and in Asia (483), followed by America (71) and Oceania (46). The term ecclesiastical circumscriptions includes Archdioceses, Dioceses, Territorial Abbeys, Apostolic Vicariates, Apostolic Prefectures, Missions sui juris, Territorial Prelatures, Apostolic Administrations, Military Ordinariates. (SL) (Agenzia Fides, 3/01/2022)