AFRICA/SUDAN - Appeal of the Bishop of El Obeid: "The country is safe only if every single citizen is" 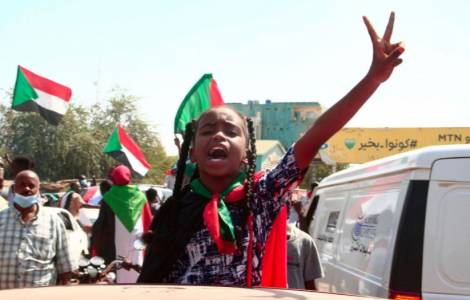 2021-12-02
The commitment of Comboni missionaries: helping refugee minors from South Sudan to return to school

El Obeid (Agenzia Fides) - On Sunday, January 2, 2022, the news of the resignation of the Sudanese Prime Minister Abdalla Hamdok was known, who declared that he could not return power to the civilian population after the military coup on October 25. Thousands of people protested against the military rule on Sunday, both in the capital Khartoum and in nearby Omdurman. Now power will return completely to the military to the detriment of the security of the entire population. "Freedom, peace, justice, and Sudan that accommodates everyone and that looks forward to changing and building a new Sudan in which everyone is equal, as one people and one nation" which is the remembrance of the overthrowing of Sudan’s seventh Head of State Omar al-Bashir by a popular revolution that ended almost three decades in power, which the Bishop of the diocese of El Obeid, Mgr.Yunan Tombe Trille Kuku, highlighted on the occasion of his Christmas and New Year 2022 message.
"Security of every Sudanese brother and sisters, is the security of Sudan", declared the Bishop, who is also President of the Catholic Bishops' Conference of Sudan (SCBC), in the note sent to Fides.
Archbishop Trille stressed the urgent need for security for all citizens of the country and the renewal of faith through trust in God and participation in the promotion of peace. "At Christmas, we seek forgiveness to start a new page in our lives with those around us, we seek to love God and the others because he who does not love, does not know God". The Bishop added that Christmas is "the moment we think of others, a time of selflessness, where we forgive and evaluate our lives, our behavior, and our relationship with God and people to change and become a better person than we are now ".
According to the Prelate, the previous regime used discrimination, exclusion, and marginalization approach to rule the country since independence hence it has led to the current Sudan, yet the new Sudan that everyone seeks is 'better with the cooperation of every Sudanese who is proud of his being a Sudanese, whether military or civilian without hateful tribalism or racism'. Bishop Trille called on every Christian believer to pray for everyone, for all in authority "so that we may lead a quiet and tranquil life in all devotion and dignity".
In total, several hundred Sudanese have been beaten, injured or arrested since last October. Sudan has about 44 million inhabitants and has been in a very precarious condition since dictator Omar Bashir was forced to resign two years ago following massive popular protests. Prime Minister Hamdok was expected to lead a government made up of civilian and military technicians until the new elections, scheduled for July 2023. (AP) (Agenzia Fides, 3/1/2022)