AFRICA/TOGO - The true meaning of Christmas in caring for others: the missionaries never stop 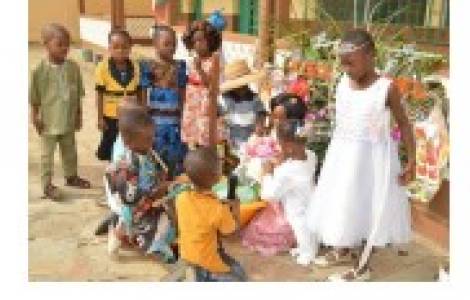 2022-01-15
"Equalization and the health of the priest": General Assembly of the Fraternity of Diocesan Priests of Togo

2021-12-22
The true meaning of Christmas in caring for others: the missionaries never stop

Kolowarè (Agenzia Fides) - "This is the last piece of news from Kolowaré. On Thursday, December 30 I will move to Lomé to accompany a group of young people who are thinking of joining our community". Thus began the message that Father Silvano Galli, priest of the Society for African Missions (SMA) from the small mission of Kolowarè, Togo, sent to Fides with his Christmas greetings in view of his next move.
Fr Galli talks about when he arrived in Kolowaré for vacation in 2004. "I have been here since then. I came from the Ivory Coast, so I discovered another country, Togo, other peoples, the Tem-Kotokoli. Even if they did not know me, I was welcomed as a brother, both by Christians and by Muslims who shared their culture, which I in turn tried to share and make known".
"Together with the children of the schools of our sisters Notre Dame des Apôtres (NDA) from Sokodé, Sister Christine, Director of the school, the teachers, we offer you our best wishes for a Christmas that opens our hearts to the dimensions of the world. I say 'our sisters' because they were founded by the second Superior General of the SMA, Father Augustin Planque".
"Jesus is God's gift to the world; the Wise kings bring him gifts, as well as Santa Claus to the children - continues the missionary. Some of them, however, not only say «I want, I want!», but they carry out unexpected and revolutionary actions: they give in turn because they have understood the meaning of Christmas. They are moved by tenderness and care for others, they want to become an active and participant part of what they experience and do it with the disarming enthusiasm of the little ones.
Fr. Silvano concludes by thanking all those who have accompanied him over the years, with prayer, friendship, support, and active participation "in what we tried to do to be close to my traveling companions, especially those who struggle with more effort on the paths of life". (SG/AP) (Agenzia Fides, 22/12/2021)