AFRICA/D.R. CONGO - A maternity hospital, "the dream" of Ambassador Attanasio 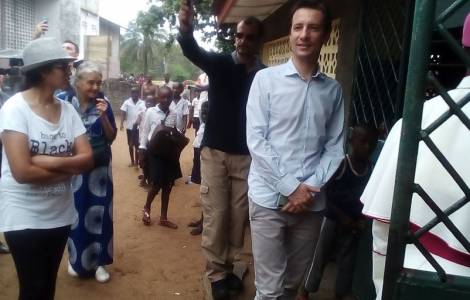 2022-05-27
"Joining forces in Christ": Catholics of the diocese of Goma prepare to welcome the Pope

2022-03-24
"Wars play cynically with the fate of entire peoples": A vision from the south of the world of the war in Ukraine

Kenge (Agenzia Fides) - "I want Ambassador Luca Attanasio’s children to know that their father lives in the many children he helped to be born. Saint Esprit maternity hospital is the tangible sign that life does not die". This is the message of hope and rebirth that Chiara Castellani, a lay missionary, a doctor for 30 years in Congo after ten years in Latin America, is launching through Agenzia Fides. The doctor, director of Kimbau hospital for 20 years, is the only doctor for 150,000 inhabitants. Called in 2010 by the local Bishop, Msgr. Jean Gaspard Mudiso Mund'la, SVD to head the BDOM of Kenge, the missionary medical office of the diocese. Chiara Castellani regularly received visits from Ambassador Attanasio and his wife Zakia who over the years had become supporters of various projects.
Castellani today says to Fides: "As director of the BDOM in Kenge, after a first decade alone but for a few months supported by a medical priest and a young nurse, I am in charge of 29 health structures of which 24 primary care centers, 2 reference hospitals of the district, 2 first level nursing schools and a university faculty of health sciences. In Kenge alone we manage, as a diocese, a general hospital that will soon be provincial, 2 primary care health centers, a first level nursing school and the faculty of health sciences.
Luca Attanasio had visited them all in 2019 and had also seen the primary care center in Lonzo of sisters the Adorers of Rivalta d'Adda. Of all the structures, the one that most moved Luca Attanasio was the Saint Esprit maternity hospital. Almost 100 deliveries a month but insufficient space to accommodate mothers and babies, often 2 or 3 per bed. Then the Ambassador with Zakia came up with a dream: to help Sister Wiwine finish the work of the Saint Esprit maternity hospital. But when they killed him, the roof, the doors, the windows, the floor, the ceiling did not exist. A lot of people, who were moved, sent help and we continued, but not to the end. And then we need tiles to make the birth place cleaner". The maternity ward project, after the dramatic murder last February 22 of the Italian ambassador, of carabiniere Iacovacci and the Congolese driver, Mustapha Miambo, was baptized "le rêve de Luca Attanasio", the "dream of Luca Attanasio".
"We continue to receive donations - continues the doctor - for the importance of the project and for the profound meaning of giving continuity to what the ambassador wanted for these people. Luca's 'dream' was to make an excellent Maternity Center. His wife, Zakia, gave a significant sum that we decided to donate entirely to support the nursing students that Luca had encouraged to study. We recently learned that Bocconi has allocated five scholarships in memory of Luca Attanasio for students in need. I would like to make an appeal to Bocconi. For the future, I believe that Luca would be very pleased if among the applications for scholarships there was that of a young Congolese, possibly from our Diocese of Kenge, perhaps for the Master in the domain of development economics". (LA) (Agenzia Fides, 22/12/2021)

AMERICA/VENEZUELA - Week for life, to be "defended, promoted, respected and loved"