ASIA/SYRIA - The Bishop of Aleppo: May Christmas and the synodal journey make our mission flourish in difficult times 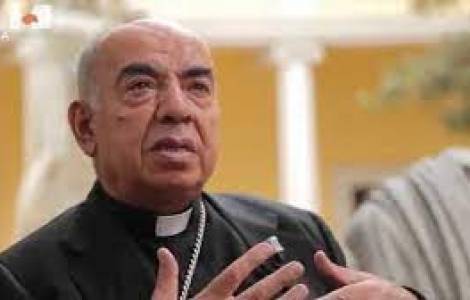 Aleppo (Agenzia Fides) - The synodal journey undertaken by the universal Church on the proposal of Pope Francis, can also become for the Catholic communities of Aleppo and tormented Syria a favorable moment to discover the new paths in which the Lord wants to trace the mission of his Church, by freeing it from the temptation to withdraw into oneself and to stand still paralyzed in the face of the rage of bad weather. Bishop Georges Abou Khazen, Apostolic Vicar of Aleppo for Catholics of the Latin rite, invites us to take advantage of this opportunity, even in the difficult conditions which torment the life of the Syrian people. In the message he has just published in view of Christmas, the Franciscan Bishop expresses a point of view nourished by Christian hope and free from any crippling recriminatory victimization. In the text published by Bishop Georges, the considerations on the synodal journey initiated by the universal Church are mixed with the anxious expectation of the Lord who is coming, as well as concrete references to the problems which beset daily life in Syria, where even in areas now remote from war and armed conflict, economic conditions "are getting more difficult every day". The "synodal model" followed in the process which will involve the whole Catholic Church in view of the Synod of 2023 - underlines the Apostolic Vicar of Aleppo - "is in fact not new. It is the model of the first Churches of Christianity : a Synodal Church in which the baptized share with priests and Bishops the joint responsibility for the future mission ". Even in the condition of suffering and precariousness which marks the post-war period in Syria, said Bishop Georges, my hope comes from tens, hundreds, I would even say thousands of lay people who did not remain idle and who have testified with their lives that the mission of proclaiming the Gospel by consoling and helping those who suffer is not a "business" reserved for the clergy. They have shown that difficult circumstances are not necessarily an opportunity and a justification for withdrawing into oneself and locking oneself in crippling and sad apathy. It is precisely the historical record of Christmas, and the very dynamism of the mystery of the nation's incarnation - that reveals the source which animates Christian hope and the mission of the Church, even in difficult circumstances and in adverse conditions: "At Christmas", remarked Bishop Abou Khazen - we celebrate the coming of Christ, the Word of God who came and dwelt among us. Yes, he came, and dwelt among us. He did not just open the door and say: 'Whoever wants to, come here, I will not leave my seat'. On the contrary, he came down from heaven to meet human beings. Likewise, the Virgin Mary, after the angel Gabriel had announced to her that she would conceive and give birth to a son without 'knowing a man', went to her cousin Elizabeth in the mountains to serve her, because Elizabeth, waiting for John the Baptist , she was old and needed someone to be close to her". The same movement of "going to meet" - added the Apostolic Vicar of Aleppo - is shared in the Gospel story by the Three Kings, who "came to seek the newborn King" by following the star. "They expected to find him in the palaces, and it is in the palaces that they first went to inquire about him, notes Bishop George, but they did not find him. And because their desire to meet the other was stronger than their imagination, they found and recognized the divine child in a humble manger, among humble people". This year's Christmas, "which we celebrate as part of the Synod's journey" continued the Franciscan Bishop, "reminds us that God does not come to us while we are still and stable, but as we walk: 'The people who walked in darkness saw a great light'. We must not let circumstances paralyze us and prevent us from walking and asking". (GV) (Agenzia Fides, 20/12/2021)

AMERICA - New Presidency of the Ecclesial Conference of the Amazonia, CEAMA