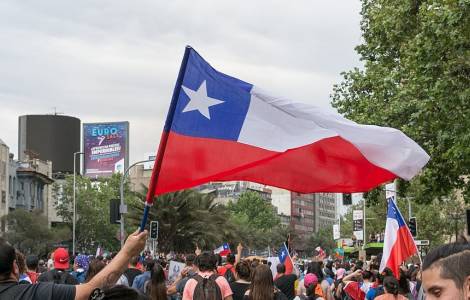 2022-03-31
Catholic Institute for Migration writes to President Boric: "We must take the problem into our own hands"

2022-03-14
Cardinal Aós: "We must not expect everything from those who govern us", everyone must play an active role to help the wounded society

Santiago (Agenzia Fides) - In a letter signed by Cardinal Celestino Aós Braco, Archbishop of Santiago and President of the Chilean Episcopal Conference (CECh) and by Monsignor Sergio Pérez de Arce Arriagada, Bishop of Chillán, Secretary General of CECh, the Chilean Bishops congratulate Gabriel Boric Font for the electoral success obtained in the ballot on Sunday, December 19 (see Fides, 17/12/2021), which will lead him to assume the Presidency of the Republic in March. "The country has expressed a vote of confidence in you and entrusted you with a great mission, destined to direct the destiny of our country as the first authority and first servant", says the message, sent to Fides. "We pray to God to give you his wisdom and strength, which you will undoubtedly need - continue the Bishops -. The mission is always greater than our possibilities and capacities, but we trust that – with the collaboration of the citizens, the work of the various social and political actors, and the spiritual strength that comes from faith and the deepest human convictions – you will be able to face his task with generosity, commitment and prudence".
Finally, the Bishops reiterate that the Catholic Church in Chile "wants to continue contributing, from its particular mission, to build a more just and fraternal humanity, where especially the poor and the suffering are respected in their dignity". They therefore assure their support, their prayers, and the contribution of pastoral action, "which we will always develop with due respect for the democratic order of our country and its legitimately elected authorities".
According to information released by international agencies, leftist candidate Gabriel Boric, 35, won 56% of the vote, compared to 44% of his opponent, right-wing legislator Jose Antonio Kast, in yesterday's Chilean presidential elections. Through his twitter profile Kast pointed out that he phoned Boric to congratulate him on the victory. Chile has been experiencing a period of instability in all fields since October 2019, also marked by demonstrations and violence that have not spared the Church. With the plebiscite of October 25, 2020 (see Fides 27/10/2020) the Chileans sanctioned the beginning of the process for the drafting of a new Constitution. Presidential, parliamentary and regional elections took place on November 21, 2021 in a climate of strong polarization, and on December 19, the ballot between the two presidential candidates. On the eve of the elections, the Bishops had stressed that "for anyone who comes to govern the country in the next period, the task will be difficult and complex", (see Fides 25/10/2021; 12/11/2021). (SL) (Agenzia Fides, 20/12/2021)