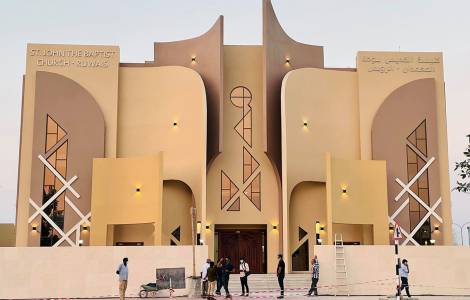 Ruwais (Agenzia Fides) - Important days begin for the Catholic community of the United Arab Emirates. Today, 16 December at 6.00 pm, St. John the Baptist Catholic Church, Ruwais will be inaugurated, 250 kilometers from Abu Dhabi, in the western part of the country. Several Sheikhs representing the national authorities will participate in the “civil” inauguration ceremony.
The blessing ceremony of the new church will take place on Friday 17 December 2021 and will be officiated by Bishop Paul Hinder, at the head of the Apostolic Vicariate of Southern Arabia (which includes the territories of the Emirates, Kuwait, Oman and of Yemen).
The parish priest is Capuchin Fr. Thomas Ampattukuzhy, who has overseen the project and construction work in recent years since the laying of the foundation stone blessed by Msgr. Hinder on December 30, 2018. Until now, the liturgies have been celebrated in provisional structures. "The construction of the new church - adds Bishop Hinder - "took longer than expected, due to Covid-19". With the construction of the new church - reports the Apostolic Vicar - there are 9 "Catholic parishes with their own places of worship" in the Emirates. To these will soon be added the church under construction in the port city of Jebel Ali, intended mainly for Arabic-speaking Catholics, mostly Maronites".
The Catholic community in the Roweis area - adds Bishop Hinder - includes about 2,500 people, "mostly Filipinos and Indians, the latter come mainly from Kerala, but there are also Koreans and others from different countries". The industrial and residential complex of Ruwais represents an emblematic example of how urban centres are born in the Emirates, and also in other countries of the Arabian Peninsula.
What was once a small promontory inhabited by a handful of fishermen has transformed in recent decades into one of the most advanced industrial areas in the Middle East, thanks to multimillion-dollar investments driven by the development of the oil and gas industry in the Emirate of Abu Dhabi. The Ruwais housing complex has developed 10 kilometers away from the industrial plants, with a network of services that includes shops, schools, banks, mosques, clinics and hospitals and a wide range of sports and recreational facilities.
After the inauguration of the Cathedral of Our Lady of Arabia, consecrated on Friday 10 December in Bahrain by Cardinal Luis Antonio Tagle (see Fides, December, 10 and 11, 2021), also the consecration of the new church of Ruweis represents a joyful and relevant moment in the experience of a multilingual and multicolored Christianity, grown in a free way, away from "organized" evangelization programs.
A Catholic community that emerged following the vital and concrete interests that pushed and push millions of people to leave their homelands to seek a better salary at oil wells, in construction sites, in the homes of wealthy locals. The effect - unexpected and not sought - is that there have never been so many Christians in the Arabian Peninsula (after the centuries of inaction following the first, exciting missionary progression, carried out by the ancient Church of the East, of Nestorian ancestry). (GV) (Agenzia Fides, 16/12/2021)