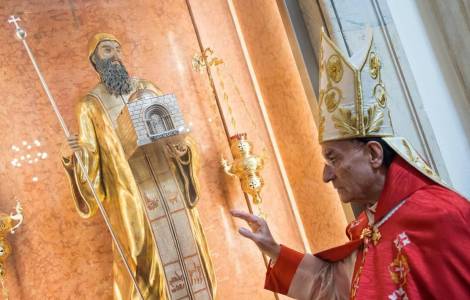 Bkerké (Agenzia Fides) - The consecration and inauguration of the Cathedral of Our Lady of Arabia in the Kingdom of Bahrain is a powerful "sign of the times". It highlights the fruits of dialogue between Christians and Muslims and confirms the attitude of increasing openness and support for the coexistence between different people on the part of the Sovereign of Bahrain and other authorities of the Persian Gulf countries. This was pointed out by Maronite Patriarch Béchara Boutros Raï at the end of his homily during the Eucharistic celebration presided over Sunday, December 12 in Bkerké, in the church of the patriarchal see. But the Maronite Cardinal added to his expressions of joy for the good news from the Persian Gulf some comments tinged with regret by the sectarian impulses that obscure the historical experience of coexistence between different faiths in the Land of Cedars: "It would be desirable that the Lebanese, whose homeland has become a model for the coexistence of faiths, revive this great message, instead of stabbing it every day. Meanwhile, the Lebanese formula is emerging in other parts of the world - the Maronite Patriarch pointed out - but we must not let it fail in his homeland, Lebanon".
During his homily, in the passages reserved - as is now his custom - to the political and social situation of the country, the Patriarch also deplored the political tactics that are effectively hindering the work of the government led by Najib Mikati, thus preventing the executive to develop in a profitable way the talks started with the International Monetary Fund and thus release the foreign aid essential to the country to try to get out of the economic disaster into which it has plunged. The Lebanese government led by Sunni Muslim Najib Mikati gained the confidence of Parliament on September 20, but has not met since October 12. The new impasse - analysts point out - is due to the disagreements and vetoes crossed between the political forces regarding the investigation of the catastrophic explosion that occurred on August 4, 2020 in the port of Beirut (investigations that have targeted political exponents linked to largely to the Shiite Amal party, led by Parliament Speaker Nabih Berri).
In his homily, Cardinal Raï also harshly criticized the draft law on capital control proposed by the government and sent to Parliament for approval. This measure - the Patriarch emphasized - would have the effect of looting the accounts of the Lebanese deposited in the banks, under the pretext of "spreading" the deficit to save the indebted banks: Does the fact of keeping the money in the bank - the Patriarch asked sarcastically - represent a fault that makes them co-responsible for the losses?". The Maronite Patriarch continued to describe the situation in the country with distressing images: "The Lebanese cannot go to the doctor. Medicines prescribed by doctors cannot be found in pharmacies, dispensaries, hospitals or even in the Ministry of Health. Medications for chronic and incurable diseases evaporate before reaching the sick and people die in their homes, on the streets and in front of the doors of hospitals and ministries. It is a catastrophic situation that Lebanon has never known before in its history".
In his homily, the Patriarch also expressed his evaluations in relation to the controversy that arose around the decree with which the Minister of Labor, Mustafa Biram, opened access to the labor market to Palestinian refugees in Lebanon, in sectors that until then were inaccessible to them. In Lebanon there are 190,000 Palestinian refugees who, by law, cannot work in many jobs, starting with those accessible to the professional categories of doctors, lawyers and engineers. The minister explained that his decree does not intend to change the law, but only to mitigate the effects of the crisis on refugees: Cardinal Raï, in his last Sunday homily, affirmed his closeness to the displaced and refugees, and at the same time called attention to the fact that "the responsibility to take care of these brothers belongs to the United Nations" through UNRWA (for the Palestinians) - and the High Commissioner for the Displaced (for the refugees from Syria). "Lebanon", the Maronite Patriarch pointed out, "is not capable of guaranteeing the rights of almost two million refugees and displaced persons. We ask for a normal life for them, with respect for their dignity, and that the Arab countries and the world find a definitive solution to the Palestinian question, outside of Lebanon, and support the rapid return of Syrian refugees to their Country". (GV) (Agenzia Fides, 13/12/2021)

EUROPE/UKRAINE - Camillian missionaries: "Make Christ present by bringing a sign of hope to the sick"