AFRICA/CENTRAL AFRICA - Dialogue between government and rebels: the Church hopes for a return to the negotiating table 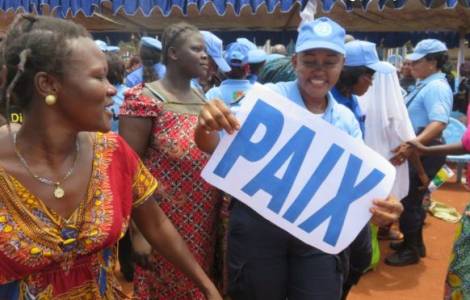 Bangui (Agenzia Fides) - "The situation is slowly improving in the Country, although the fact that the rebels entered Kaga-bandoro and Bossangoa two weeks ago is of some concern, and thus did not respect the unilateral ceasefire declared by the government in October. We are rather concerned because we do not know what it means and if it is part of a strategy.
In general, the situation in Bangui and other prefectures is calm but, after this resumption of military operations by the rebels, it is not known what could happen". This was reported to Fides by Fr. Walter Brad Mazangue, Chancellor of the Archdiocese of Bangui. "The events - he says - have begun to improve also thanks to the meetings wanted by President Touadéra with the Central African parliamentarians.
Three weeks ago, the President asked everyone to return to the negotiating table and try to tackle the issues together in order to reach a definitive peace. Many politicians had left the negotiating table and the President, in view of the dialogue convened for next December 21, is trying to work to make it more inclusive. The meeting went well, but the rebels' refusal to sit at the negotiating table remains. We will see what happens. The representative of Minusca (the UN interposition force, ed) and the French ambassador support the resumption of dialogue".
The Central African Republic, in recent months, has obtained the support of the Russian armed forces, of the Rwandan ones and also of the Russian mercenary militias of the Wagner company. The latter in particular, according to the denunciation of various reports by international organizations, have perpetrated indiscriminate violence and abuses on the civilian population. The campaign that allowed the government to quickly reconquer the territories occupied by the rebels (over 80%) therefore raises doubts about the role and work of external agents.
The Chancellor explains: "Yes it's true, there are reports of abuses committed by Russian militiamen and it is one of the many tragic and disastrous side effects of a conflict. The main victims are always civilians. Sometimes the rebels, in some areas, have mingled with the civilian population and become the protagonists of horrendous massacres. We recall the one that occurred in Bambari in October, where 30 people died in a single attack, just for a demonstration".
The Church and religious leaders have always been at the forefront of promoting national reconciliation and guaranteeing aid to the civilian populations under attack: "The action and voice of Cardinal Dieudonné Nzapalainga and the platform of religious confessions - continues Father Walter Brad Mazangue - is helping the situation a lot. Furthermore, the Bishops recently met with the President and discussed with him all the paths in order to reach peace, and the methods for convincing politicians, and especially the rebels, to re-enter the dialogue process. Then there is the widespread work carried out by priests and religious in parishes throughout the country: through exhortations, messages, homilies and testimonies, we try to help the population to enter into a mentality of peace and to build a culture and a society permeated by a spirit of peace and reconciliation". (LA) (Agenzia Fides, 9/12/2021)