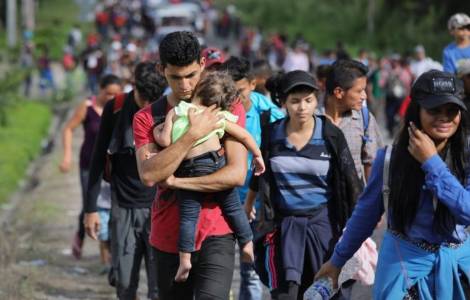 2022-08-29
Bishops: “Nothing must distract us from the essential task of education. Peace is possible. Educating to build it is a priority"

Mexico City (Agenzia Fides) - "The situation of migrants in Tapachula, Chiapas, has taken on an alarming dimension and complexity. In addition to overcrowding, delays in the application procedures for the recognition of refugee status and humanitarian visa, harassment and abuse by local and federal authorities, desperation and outbursts of violence on their part have now been added in response to the many unfulfilled promises on behalf of the federal Government".
This is the dramatic picture described by the Mexican Bishops in their "Urgent Appeal to the Government of Mexico" today, December 6, received by Fides. The text underlines that the federal government has not respected the commitments it made with migrants for their transfers and their regularization, which has triggered an escalation of tensions that has led to road blocks and conflicts with the local population, putting the physical safety of both at risk. "The situation we are experiencing is chaotic: suffering, despair and violence - the Bishops write -. In the midst of this complex reality, the Catholic Church, through the diocese of Tapachula, Chiapas, has remained steadfast in providing humanitarian assistance to migrants, also concerned by a confusing and ineffective policy of the federal government, the indifference of the state government and the role of spectators from municipal administrations".
The Bishops reaffirm their desire to do everything possible to help migrants, although resources are limited, now and in the future, with a profound Christian spirit. Despite the generous response of the parishes "who have done the unspeakable to address this situation, we see with concern that the level of demand for this situation far exceeds our good intentions". The Bishops' Conference therefore calls for urgent measures by the three levels of government, "in respect of the fundamental rights of migrants", since "it is up to the government of Mexico to create dignified conditions for the exercise of all rights for all people in accordance with the Political Constitution of the Mexican United States". It also expresses its concern when detecting that "migrants are deceived with false promises by criminals and scammers who profit from the need and pain of those who wish to transit through Mexico". Noting with disappointment that the government of Mexico has decided to resume the MPP program better known as "Stay in Mexico", which violates multiple international principles on refugees and asylum, the Bishops hope that migrants crossing Mexican territory "can see a light of hope in this valley of indifference, pain and discrimination on the part of the authorities of the three levels of government".
While exhorting the government of Mexico to respect its commitments to promote and protect the fundamental rights of migrants, the Bishops reiterate the willingness of the Catholic Church to dialogue with the Federal Government, to find effective proposals. They also recall that migrant hostels, in dioceses throughout the country, continue their humanitarian work at the service of the poorest people, migrants, asylum seekers, deportees, girls, boys and adolescents, regardless of their creed, nationality, place of origin or any other condition. "To all of you, Bishops, priests, parish priests, men and women religious, lay people, we address our respect, gratitude, support and profound admiration, since you are the face and hands of a united Church, which will always meet those who suffer most. We bless you and invite you to continue to offer hope and joy". (SL) (Agenzia Fides, 6/12/2021)

AMERICA/PERU - Migrants: we need complete and fair immigration policies, no to xenophobia and discrimination in society