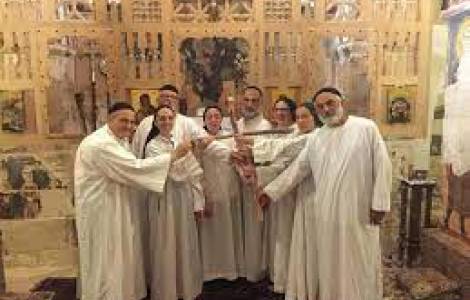 2021-12-28
Father Jacques Mourad: the monastery of Mar Elian, devastated by jihadists, could soon return to being a place of prayer and peace

2021-12-20
The Bishop of Aleppo: May Christmas and the synodal journey make our mission flourish in difficult times

Nebek (Agenzia Fides) - The monks and nuns of Deir Mar Musa renew their monastic consecration "on the basis of our three priorities: prayer, manual labor and hospitality" being always "attracted to the horizon of harmony, friendship and of mutual esteem with Islam and Muslims, whom we love in the name of Christ, just as He loves them". This renewed monastic consecration, full of gratitude for the gifts of grace received in recent times, is recounted in the Christmas letter sent in the season of Advent to friends scattered all over the world by members of the monastic community founded in Syria by the Roman Jesuit, Paolo Dall'Oglio, who disappeared in July 2013 while he was in Raqqa, at that time a stronghold of the jihadist militias of the Islamic State (Daesh).
As every year, the letter gives a brief account of the joys, commitments and pains that have marked the life of the members in the community in the last year, as well as the tribulations, expectations and consolations that have occurred in 2021 and have marked the path of the Middle Eastern peoples - starting with the Syrian one - and of the whole human family.
In 2021 - remember the monks and nuns of Deir Mar Musa - "the most important thing lived in community form was the Chapter", the electoral session was held at the mother monastery between May 18 and June 4 in the presence of all members of the professed community. The Chapter - reads the letter - "was much more than a mere routine annual appointment; it constituted an important, pivotal episode in the history of our nascent order, and we would be right to call it a quasi-foundational chapter, during which we re-orientated our ‘ship’ towards the port of safety".
In acknowledging their own weaknesses and limitations, the monks and nuns of Deir Mar Musa also found space "for a transparent and frank – even if at times painful – review of our personal relationships, which had previously gotten strained for a number of reasons, and thus, an occasion to renew our trust in each other and receive God Almighty’s trust in us".
During the Chapter, the monks and nuns were also able to reconsider their relationship "with the universal and local Church, including that with Middle Eastern Christians, both those who have remained in the East and those who have emigrated to the four corners of the earth. We reflected at length - the letter reads - on the heredity left us by the founder of our community, Father Paolo Dall’Oglio, and on a method to activate our special charism in religious dialogue,
and in a special way with Islam; we have tried to examine the emergencies to which the Church is called, with its strengths and weaknesses. In short, what is God's will in our life at this historical moment".
During the Chapter, Father Jihad Youssef was elected as the new Abbot of the community (who opens the letter with the poignant and luminous story of the last few weeks lived alongside his dying mother, victim of the pandemic) while father Jacques Mourad was chosen as administrator and vice-superior, the monk who in 2015 was kidnapped and held hostage for long months by jihadist militiamen of the self-styled Islamic State (Daesh).
The pages of the letter offer a precious insight into the last year of life of the monks and nuns of Mar Musa, revealing the vitality of the small "nascent community" initiated by Father Paolo Dall'Oglio and the fruitfulness of their Christian gaze with which they look the things of the Church and the world from the "monastic garrisons" in which they are scattered (the "mother house" of Deir Mar Musa, the monastery of the Virgin Mary in Sulaymaniyah, Iraqi Kurdistan, and the Monastery of San Salvatore in Cori, Lazio). The pages intertwine the daily details of the life of the monks and nuns, such as the description of the rose jams prepared by Father Jacques or the results of the work in the monastery lands ("as for the olive season, the harvest was poor but of excellent quality, sufficient to ensure the annual supplies of green and black olives, but not of oil"). The recipients of the letter are updated on visits to the monastery of Deir Mar Mus and by the Syrian Catholic Patriarch Ignace Youssif III Younan and also by Cardinals Mario Zenari (Apostolic Nuncio in Syria) and Leonardo Sandri (Prefect of the Congregation for the Oriental Churches). It offers a summary of the many initiatives and charitable works - such as financial aid to dozens of university students in Homs and Damascus, the music school, language and literacy courses, or the Qalamoun kindergarten in Nebek together with daily concerns such as that represented by the landfill located along the road to the monastery, Deir Mar Musa, "which in recent years has grown a lot due to war, abandonment and the lack of serious managerial and financial capacity".
"The economic situation in Syria continues to worsen and the reasons for this are many, some internal, such as favouritism and corruption, and some external, such as international sanctions and the Caesar Act, though perhaps we should call it the Act of the Pharaoh, who became tyrannous because no one stood up to him. Work is scarce and one job is not enough to raise a family, not even below decent living standards. People still suffer from a lack of electricity and basic materials such as gas and diesel used for heating and to operate factories, including bakeries. And the wait time in the bread queue in front of the public bakeries to buy the “bread of the poor” is still long. Despite this, there are people who go to the private hospitals, buy bread, gas, diesel and petrol on the “black market”, which they call “the free market” but which is, in fact, a mafia "slavery market". (GV) (Agenzia Fides, 2/12/2021)