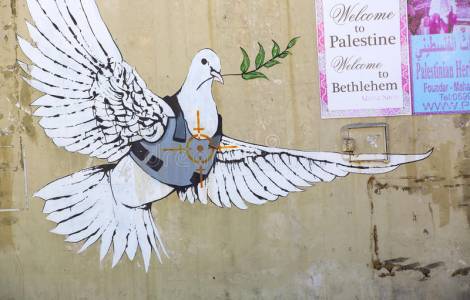 2022-01-26
Catholic bishops to the Heads of other Churches: our synodal journey needs your experience and your advice

2021-12-22
Israel responds to the Heads of Churches: your accusations are baseless and risk fueling violence

Bethlehem (Agenzia Fides) - A vibrant call to all Palestinian Christians to resist the pressures and temptations that push them to emigrate and rediscover the beauty of living in the land where Jesus was born, died and risen, also taking on all suffering of their own people to build the Palestinian homeland together with their Muslim brothers. These are the intentions that animated the inaugural "founding" Conference of the Assembly of Christian Associations in Palestine, held in recent days at the University of Bethlehem. The meeting, convened in the shadow of the eloquent slogan "native and rooted in this land", represented the official debut of a network made up of more than twenty associations and organizations of various kinds - social, cultural, economic - animated by Palestinian Christian lay people.
The initiative can also be considered as a concrete development of the ideas and projects offered in the recent past by "Kairos Palestina", a group of Palestinian Christian exponents of different confessions established in 2009 as an instrument of reflection and political proposal on the Palestinian question and prospects of overcoming the state of conflict with Israel.
The meeting hosted on Friday, November 26 by the University of Bethlehem was attended, among others, by the mayor of Bethlehem Anton Salman, the Bishop Emeritus of the Lutheran Church in Jordan and the Holy Land, Munib Younan, and Youssef Daher, Executive Secretary of the Jerusalem Inter -Church Centre, representing the Ecumenical Council of Churches (WCC). The main report of the meeting was entrusted to Archbishop Michel Sabbah, Patriarch Emeritus of Jerusalem of the Latins. "In my speech", reports Patriarch Emeritus Sabbah to Fides, "I stressed the urgency of living communion and unity among the baptized concretely, following the commandment of love given to us by our Lord Jesus Christ. We are called to live as a family, in which no one is abandoned, no one remains in poverty, but always finds support in the brothers. And living this love among us Christians" adds the Patriarch Emeritus "never leads to closing up in ourselves and going 'against' others. Christian love is universal. Love between Christians always 'overflows' and reaches all others: Jews, Muslims, and all our companions on the journey. Christian Love gives birth to free people, also free from all sectarianism".
The speakers underlined the urgency of creating new opportunities to encourage young Palestinian Christians to remain in their homeland and also spend their energies in social and political work aimed at curing "all the pain of the Palestinian people". In the concluding communiqué of the meeting, the participants in the meeting also called on the Palestinian National Authority to guarantee safety and protection to all citizens, to support the rule of law and to encourage the development of school programs that also include Christian content in the exposition of the history, culture and spirituality of the Palestinian people. The final document also includes an appeal to the international community and to all the Churches of the world to contribute in all possible ways to overcoming the Israeli-Palestinian conflict by guaranteeing the right of Palestinians to freedom, independence and self-determination, safeguarding the status quo of Jerusalem from all political operations aimed at altering its profile as a Holy City "open to all". (GV) (Agenzia Fides, 1/12/2021)

ASIA/BAHRAIN - "Civil inauguration" of the Cathedral of Our Lady of Arabia, in the presence of Cardinal Tagle