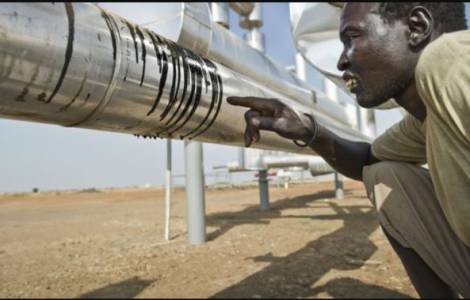 2021-12-23
We can all contribute to bringing peace to the earth, according to the bishop of Tombura-Yambio

2021-12-15
Ezo county towards an inclusive, accessible and sustainable post-pandemic world

Juba (Agenzia Fides) - "It is encouraging to know that the Swedish authorities have decided to hold the oil company Lundin Energy to account for its role during the civil war", say the leaders of the various Christian denominations of South Sudan, gathered in the South Sudan Council of Churches of (SSCC), regarding the decision by the Swedish Public Prosecution authority that on November 11 decided to proceed against the multinational mining company based in Sweden and operating in many places around the world. According to the magistrates, the company is guilty of "aiding and abetting war crimes committed" between 1999 and 2003. Among the signatories of the document of religious leaders, sent to Fides, is the Archbishop of Juba Stephen Ameyu, who is also vice president of the SSCC.
According to a report published in 2010 by the PAX movement (formerly "IKV Pax Christi") for the European Coalition on Oil in Sudan (ECOS) and subsequently confirmed by numerous testimonies and campaigns such as that of unpaiddebt.org, three international oil companies, including Lundin, signed contracts for the exploration of areas and the extraction of oil in South Sudan, which triggered a "terrible war in the whole region".
The companies asked the government of Khartoum (at the time of the events, between 1999 and 2003, South Sudan had not yet achieved independence, ed) to vacate massive areas, guarantee the safety of plants and workers at all costs, knowing well that this would have triggered indiscriminate attacks on civilians, mass rape, torture and kidnapping, even of children. In that period thousands of people died and others were forcibly forced to flee.
"For years my service has been in the territory of the diocese of Malakal - reports Sister Elena Balatti, a Comboni missionary - where the oil areas of South Sudan are located. The territory of the diocese, in fact, includes Unity State, exactly where oil exploration began in the 1980s. I remember very well the stories of the people at the time, the Nuer ethnic population was literally surprised by the situation because they had no idea what oil was and what it was used for. The explorations continued through the 1990s and early 2000s. The government of Khartoum decided to conduct the exploration and once the presence of oil was ascertained, demanded that the regions be left clear to allow the companies to have free territories and implement infrastructure. The people, completely unaware, were told that they had to leave their homes, fields, livestock, because the government had to start activities. Obviously there were riots that were quenched in blood and subsequent deportations were recorded".
Tensions were added to the suffering of hundreds of thousands of civilians, harassed for years by conflict and instability and, in a context of generalized violence, the situation worsened. "It is positive that an investigation has been opened. If the Swedish government has gone so far as to launch an investigation and make formal accusations against a company, it means that there is evidence that Lundin was at least complacent and did not take human rights into consideration. The government, at the time, committed terrible crimes; Lundin, therefore, as well as other companies including the Canadian Talisman (later forced to withdraw thanks to the pressure of the Canadian civil society, which did not allow complicity in a war zone, ed), is guilty of not having requested sufficient guarantees to human rights and to have favored mass deportations to areas that were not uninhabited. Among the crimes, there are also environmental crimes. In recent years there have been episodes of suspicious diseases and deaths of humans and animals and finally the government has decided to promote investigations on the environmental impact of oil extraction in the area". (LA) (Agenzia Fides, 1/12/2021)

ASIA/KAZAKHSTAN - Bishop dell’Oro thanks for the words of the Pope during the Angelus prayer: "We join the prayer"