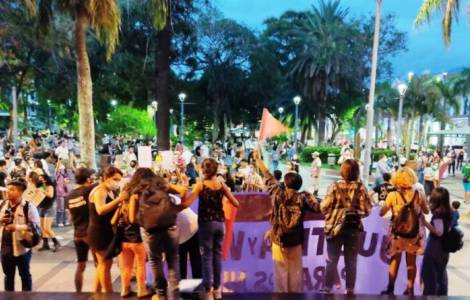 2022-01-07
Caritas Bolivia will continue to help migrants at the borders with Peru, Chile and Argentina in 2022

2021-12-15
The bishops: contemplating the family of Bethlehem, every home becomes a school of growth and positive experiences

Santa Cruz (Agenzia Fides) - The Archdiocese of Santa Cruz expressed its disapproval of the new assault that took place in the late afternoon of November 25, when a group of feminists gathered outside the cathedral, shouting violent slogans and insults. A woman who tried to stop the protest was attacked and beaten. "It is surprising that those who have proclaimed themselves defenders of women, act in a violent manner against these same women, as in the case of the woman who, defending the cathedral, was attacked and brutally and violently beaten", is written in the statement released by the Archdiocese, sent to Fides, which has the title "Yes to the defense of women, but with respect and not with violence".
"This intolerant and aggressive attitude disqualifies the goodness of the cause - continues the text of the Archdiocese -. Likewise, the absence of security and law enforcement agents, whose mission is to prevent clashes, defend the integrity and life of people, as well as preserve the peace of citizens, as well as the historical, cultural and religious heritage of our city, is also of concern".
The communiqué ends with a call to the authors of these excesses and to all, "to accept the call of the Lord and to be agents of peace and life and not heralds of hatred and violence: "Blessed are those who work for peace, because they will be called Children of God" (Mt. 5,9).
On October 31, a group of feminists had already vandalized the entrance to the Cathedral of Santa Cruz de la Sierra, while Archbishop Sergio Gualberti was celebrating Sunday mass. The demonstrators had smeared the walls with red paint. According to local media, through these violent actions, feminist activists challenged the position taken by the Catholic Church on the case of an 11-year-old girl who became pregnant after repeated violence. After leaving the hospital, she was transferred to a home managed by the Archdiocese of Santa Cruz, by decision of the Guarantor of Childhood and Adolescence, respecting the wishes of the young girl and her mother not to resort to abortion. The explosion of a bomb on November 24 at the entrance to the building housing the headquarters of the Bolivian Bishops' Conference in La Paz seems to be part of the same framework, without causing consequences for people but only material damage (see Fides 25/11/2021) (SL) (Agenzia Fides, 30/11/2021)

AFRICA/D.R. CONGO - A maternity hospital, "the dream" of Ambassador Attanasio