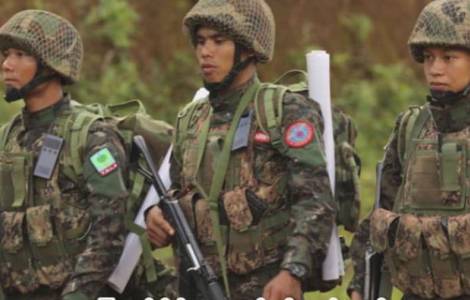 Turin (Agenzia Fides) - Take stock of the two Asian conflicts that have occupied the most news during the year 2021: this is the objective of the seminar "Myanmar and Afghanistan: far, very close", organized in recent days by Villa Lascaris, Formation Center of the Archdiocese of Turin (Italy). The first scenario is that linked to the military coup of last February which put an end to the brief democratic interlude in Myanmar; the second is that of Afghanistan, where a 20-year war suddenly ended in August, giving way to the Taliban to seize power.
Don Ermis Segatti, professor of the history of Christianity and non-European theologies at the Faculty of Theology of Northern Italy, took stock of the two different realities that the war brought together, highlighting a number of similar aspects in the two countries: from the ethno-linguistic mosaic to drug trafficking, from the clash between the center and the periphery to foreign interference, highlighting the complexity of the two situations. Thanks to the collaboration with the geopolitical portal "OgZero", Massimo Morello, journalist and analyst, author of "Burma Blue" and resident in Bangkok, proposed a portrait of the Burmese leader Aung San Suu Kyi, Nobel Peace Prize, icon for the defense of human rights, later criticized for managing the issue linked to the Rohingya minority. The analyst drew a detailed picture of the "Tatmadaw", the Burmese army, noting that its powerful neighbor, China, does not appreciate the situation of instability in Myanmar.
On the other hand, Emanuele Giordana, author of "The great illusion", a book dedicated to Afghanistan, having first-hand knowledge of the country, pointed out that the conflict has left the Afghan nation in ruins: seven out of ten Afghans are below the poverty line, rights and services are guaranteed only to a few and the tragic toll is 250,000 victims, mainly civilians. The local Catholic community showed a keen interest in the scenarios in question, questioning the challenges that the presence of the Catholic Church (well developed and alive in Myanmar, for the moment absent in Afghanistan, after the interruption of the Missio sui iuris) faces and lives in these contexts. The cultural and missionary center of Villa Lascaris, open to the world, directed by Father Marco Fracon, promotes and organizes cultural and spiritual activities and events, hosting conferences and seminars, study days and spiritual exercises for parishes, associations, ecclesial and non-ecclesial organizations. (MG) (Agenzia Fides, 30/11/2021)