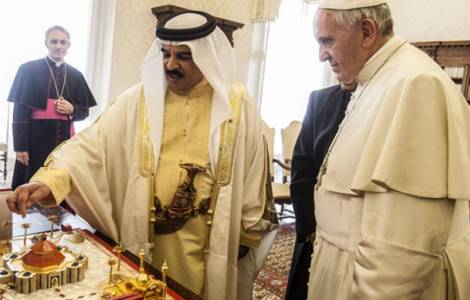 2021-12-09
"Civil inauguration" of the Cathedral of Our Lady of Arabia, in the presence of Cardinal Tagle

2021-11-29
On December 10, the Cathedral of Our Lady of Arabia will be consecrated, "missionary dream" of Archbishop Ballin

2020-04-14
Apostolic Vicar of Northern Arabia, Bishop Camillo Ballin passes away, missionary in the lands of Islam

Manama (Agenzia Fides) - It will be dedicated to Our Lady of Arabia, and will become one of the main Catholic churches of the Arabian Peninsula, seat of the Apostolic Vicariate of Northern Arabia. The Cathedral of the Kingdom of Bahrain is located in the municipality of Awali and is finally preparing to be consecrated and inaugurated in the coming weeks, immediately after the liturgical Solemnity of the Immaculate Conception of the Virgin Mary. The place of worship will be consecrated by Cardinal Luis Antonio Tagle, Prefect of the Congregation for the Evangelization of Peoples, on Friday, December 10. Only a small number of the local Catholic community can participate in the consecration ceremony, in compliance with the rules established by the local authorities to combat the pandemic. The day before, His Majesty Hamad bin Isa al Kalifa, King of Bahrain, is expected to attend the civil inauguration of the place of worship.
The new Cathedral of Bahrain will be able to accommodate 2,300 people. Its inauguration and consecration is the culmination of a long journey, which in its various passages symbolically represents the dynamics and conditions in which the ecclesial life of many Christian communities present in the Arabian Peninsula flourishes.
In February 2013 it was the Comboni Archbishop Camillo Ballin (who died on April 12, 2020, at the age of 75), Apostolic Vicar of North Arabia, who gave, through Fides, the news that the King of Bahrain had given the Apostolic Vicariate a land of 9 thousand square meters "where we will build the new church" (see Fides, 13/2/2013). With the delicate spiritual sensitivity that characterized it, the Archbishop immediately noticed that the document of the royal donation was dated February 11, the day on which the Catholic Church celebrates the feast of the Blessed Virgin Mary of Lourdes. "Our prayers have been answered. Our Lady of Arabia is really capable of working miracles", Archbishop Ballin wrote at the time. On May 19, 2014, during the visit to the Vatican to Pope Francis, it was King Hamad bin Isa himself who presented the Pope with a plastic model of the Cathedral under construction (see photo). About 80,000 Catholics live in Bahrain, mostly workers from Asia, mainly Filipinos (compatriots of Cardinal Tagle, sent to preside over the consecration ceremony of the Cathedral) and Indians. The territory of the Kingdom of Bahrain consists of an archipelago of 33 islands near the western shores of the Persian Gulf. The nation, ruled by the royal family al Khalifa, was previously an Emirate, which became a constitutional monarchy in 2002. The municipality of Awali, where the new church stands, is located on a small island in the center of the Kingdom, was founded in the 1930s by the Bahrain Petroleum Company. The town is mainly inhabited by immigrant workers of various nationalities, mostly employed in oil refining plants.
The consecration of the Cathedral of Our Lady of Arabia gains importance also in the light of the recent message with which King Ahmed bin Isa officially invited Pope Francis to visit Bahrain. The official invitation of the monarch - as also reported by Fides (see Fides, 26/11/2021) - was delivered to the Pontiff by Sheikh Khalid bin Ahmed bin Mohammed Al Khalifa, His Majesty's Advisor for Diplomatic Affairs, received on Thursday November 25 at the Vatican by both the Bishop of Rome and the Cardinal Secretary of State, Pietro Parolin. During his visit to the Vatican, the envoy of the Bahraini monarch also conveyed to the Pope greetings and good health wishes sent by King Ahmad, together with his appreciation "for the fundamental and leading role played by Pope Francis in establishing and promoting the interreligious dialogue and understanding between the various cultures and civilizations, as well as in spreading the values of human brotherhood and coexistence among all".
The gift of a new church in Bahrain, dedicated to Our Lady of Arabia, will still be a joy for him too, who with perseverance, patience and apostolic passion, spent his life as a missionary and then as a Bishop, at the service of the Christian communities present in Arab countries with a Muslim majority. (GV) (Agenzia Fides, 29/11/2021)