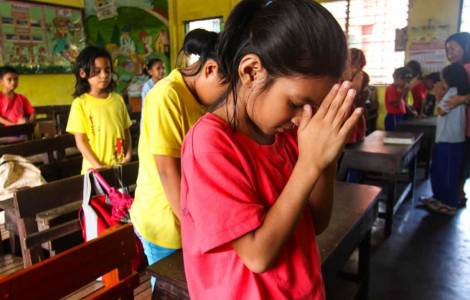 Manila (Agenzia Fides) - The Filipino Bishops have released a prayer for the national and local 2022 elections. The prayer asks that "the forthcoming national and local elections may truly reflect, the will of the Lord who guides the destinies of nations".
According to a statement by the president of the Philippine Bishops' Conference, Archbishop Romulo Valles - about to hand over the office to new President Bishop Pablo Virgilio David - the prayer is similar to the "Oratio Imperata" but its focus is on the 16 values enshrined in the preamble of the Constitution.
The Episcopal Commission on Liturgy suggested that parishes pray the Oratio Imperata for Protection against the COVID-19 before the Mass. The 2022 Election Prayer can be recited every first and third Sunday of the month, while the Synod Prayer will be said every second and fourth Sunday of the month. The Parish Pastoral Council for Responsible Voting (PPCRV) - the official voting control body initiated and managed by the Church - has asked the Bishops' Conference for an endorsement of its “Prayer Power Campaign” by asking the public to "collectively pray for a peaceful, credible, and transparent" elections.
The prayer was prepared by Archbishop Socrates B. Villegas, former president of the Episcopal Conference.
In recent weeks, many Catholic leaders have appealed to voters "to vote for good candidates who will lead the country with honesty and sincerity".
Father Jerry M. Orbos, missionary of the Divine Word, said: "As a people and as a nation, Let's not give up the hope that a new generation of leaders may rise and shine in our land. We must not be cynical about the genuine service, goodness and sacrifice of our public administrators. Let's not lose heart and let's not give in to dirty politics. Let's all work for our dreams and continue to believe that dreams come true and miracles can happen", said Fr. Orbos, a former missionary in South Korea. According to Randy David, a well-known sociologist and political commentator, the Philippines faces problems and challenges such as poverty, inequality, corruption, crime and the drug threat, as well as Covid-19.
In view of the political elections, scheduled for May 9, 2022, the Electoral Commission will publish by January 2022 the final list of official candidates, including those running for the office of president, vice president, for the seats of 12 senators and 308 members of the House of Representatives. Then there are the votes for 81 governors and deputy governors, 780 seats in the provincial councils, 1,634 mayors and deputy mayors of municipalities, 13,546 seats in the municipal councils. According to the 1987 Philippine Constitution, general elections are held every six years, on the second Monday in May. (PA) (Agenzia Fides, 29/11/2021)