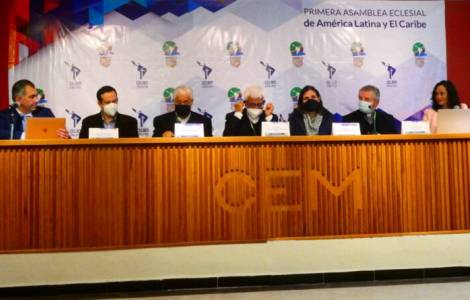 Mexico City (Agenzia Fides) - At the conclusion of the first Ecclesial Assembly of Latin America and the Caribbean, held from November, 21 to 28 in Mexico City and online (see Fides 09/11/2021; 23/11 / 2021), a message was distributed to the people of God entitled "We are all outgoing missionary disciples". "The voice of the Spirit has resounded in dialogue and discernment, indicating different horizons that inspire our ecclesial hope", is what is written in the message, which indicates a series of challenges and pastoral orientations to be taken urgently. Among these: to work for a renewed encounter of all with Jesus Christ incarnate in the reality of the continent; to accompany and promote the leadership of young people; to pay attention to the victims of abuse in ecclesial contexts and commit to prevention; to promote the active participation of women in ministries and in ecclesial decisions.
Furthermore, the promotion of human life is reaffirmed, from conception to natural death; formation for synodality; the participation of the laity in the cultural, political, social and ecclesial sphere; listening to the cry of the poor, the excluded and the rejected. The need for the renewal of formation courses in seminaries was also highlighted, so that they take on integral ecology, the value of indigenous peoples, inculturation and interculturality, the social thought of the Church as necessary themes, and everything that contributes to adequate formation to synodality. Finally, it is urgent to renew, in the light of the Word of God and of the II Vatican, our conception and experience of the People of God; reaffirm and prioritize the realization of the dreams of Querida Amazonia; accompany indigenous peoples and Afro-descendants in the defense of life, the land and their cultures.
In the final message, the participants of the Conference affirm that they were guided by the desire to revive the spirit of the V General Conference of the Latin American Bishops of Aparecida, in 2007, in harmony with the previous General Conferences, in the horizon of the Guadeloupe Jubilee in 2031, and the Jubilee of Redemption, in 2033. "With great joy we lived this Assembly as a true experience of synodality - they write - in mutual listening and in community discernment of what the Spirit wants to say to its Church.
We walked together recognizing our multifaceted diversity, but above all what unites us, and in dialogue, our hearts as disciples turned to the realities that the continent is experiencing, in its sorrows and hopes".
In particular they denounce the pain of the poorest and most vulnerable, who suffer the scourge of misery and injustice as well as the lack of solidarity; the destruction of the common home and the "throwaway culture" which mainly affects women, migrants and refugees, the elderly, indigenous and Afro-descendant populations; the consequences of the pandemic, which further increases social inequalities, even compromising the food security of a large part of our population; the sufferings due to clericalism and authoritarianism, which lead to the exclusion of the laity and especially of women from decisions on the mission of the Church, thus hindering synodality.
However, there was no lack of signs of hope, such as the synodal journey, which represents "a significant space for encounter and openness for the transformation of ecclesial and social structures that allows for a renewal of the missionary impulse and closeness to the poorest and most excluded". Another sign of hope is constituted by religious life, "women and men who bear witness to the good news of the Gospel", and by the vitality of popular piety.
"This Assembly is a Kairos - highlights the message -, a propitious time for listening and discernment that connects us in a renewed way with the pastoral guidelines of Aparecida and the magisterium of Pope Francis, and encourages us to open new missionary paths in geographical and existential peripheries and in the places proper to an outgoing Church". (SL) (Agenzia Fides, 29/11/2021)

AMERICA/COSTA RICA - The Bishops: Elections - "Let us seek the good of our nation, beyond partisan struggles"

AMERICA/DOMINICAN REP. - The Bishops: "St. Joseph supports us in our daily struggles, no one like him knew how to go through difficult times"

AMERICA/COLOMBIA - 50 years since the death of the first Apostolic Vicar of Buenaventura, Monsignor Gerardo Valencia Cano

AMERICA/SAN SALVADOR - Beatification of the four martyrs, the diocesan Postulator: "Our vocation is to follow the Lord"