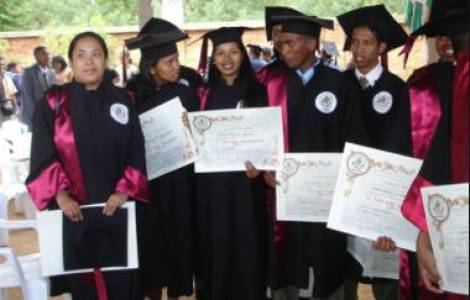 Antananarivo (Agenzia Fides) - "In Madagascar, the mission of the Priests of the Sacred Heart of Jesus, (also known as Dehonian missionaries) represents an important point of reference for the local population, which is very poor: today, some of the first foreign missionaries have died, others have returned to their country or left as missionaries in other countries, but the Malagasy Dehonians are growing. Currently, between priests and laity, our community has more than 70 missionaries. Everyone takes care of offering them hospitality, medical assistance, education, but above all help and hope". This is what Father Yvon Mathieu, Regional Superior of the Dehonians in Madagascar, told Agenzia Fides, speaking of the missionary commitment in the African country and the challenges that the religious face on a daily basis. "For us - he continues - it is important to be close to the people. In our community, we strive to carry out a work of evangelization and human promotion, trying to educate young people to work together, to help each other, stimulating them to reflect and seek their own autonomy".
Madagascar has been experiencing a devastating food crisis for years and is facing the worst drought in the last 40 years, intensified by sandstorms and invasions of locusts. "Families living in the south of the country - reports Father Yvon - are on the verge of famine and the children risk dying of hunger. Much of the population, which once depended on agriculture, has been forced to move to nearby cities, putting the already scarce resources under pressure. In addition, the persistent coronavirus pandemic has increased restrictions, which are unbearable for people who live hand-to-mouth. Naturally, explains the Regional Superior, in this context, the last thing parents think about is the schooling of their children, their attention being focused on the most essential things. This is why, he continues, we try to make the children study, to educate their parents and, indirectly, to direct them towards lucrative activities of various kinds. Currently, in addition to their strictly religious work in the various parishes located on the edge of the forest and in the many villages, the Dehonian missionaries are engaged in vocational training: they run a carpentry school, which lasts three years, and a course in cutting and sewing, attended by more than a hundred young girls. One of the main projects carried out by the Priests of the Sacred Heart of Jesus is the foundation of a university: "It is our flagship - says Father Mathieu - after years of reflection, contacts, meetings, the idea was born to give the children of the poorest the possibility of approaching culture and science: this is how the Athénée Saint Joseph in Antsirabe was born in 2000, currently twinned with various university centers around the world, followed in 2018 by a second campus in Antsohihy, in the north-west of Madagascar. For some years, we have already had 1500 students". In addition, in the capital Antananarivo, a school complex has been set up, from kindergarten to high school, which is now attended by more than 1,600 children. In the town of Fianarantsoa, a boarding school was founded next to the Dehonian minor seminary to meet the demand for schooling from the local population. People, concludes Father Yvon, need to be helped, encouraged, animated and supported to slowly achieve sufficient autonomy. We are not discouraged and we rely on the Lord to carry out the mission". (ES) (Agenzia Fides, 27/11/2021)