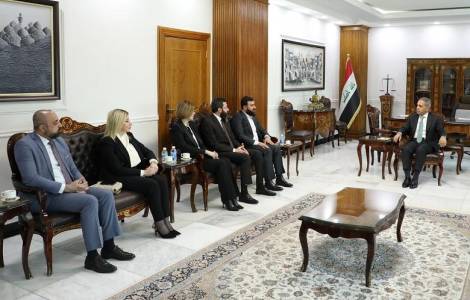 Baghdad (Agenzia Fides) - In Iraq antagonistic political blocs are also competing on the thorny issue of real estate illegally stolen from Christian owners in recent decades and the initiatives implemented to return illicitly stolen properties to legitimate owners.
In recent days, the Iraqi media have given new prominence to the campaign promoted by the Sadrist movement in favor of Christian citizens and Mandaeans who in recent years had suffered arbitrary and illegitimate usurpations of houses and land by individuals or organized groups. Hakim al Zamili, a representative of the Party headed by Shiite leader Muqtada al Sadr, who won the political elections on October 10, was also reporting on the developments of the initiative.
In particular, updates on the campaign launched by the Sadrist movement concerned the restitution to Christian owners of about 30 previously illegally usurped properties in the Baghdad area. Journalistic reports also gave an account of upcoming, similar operations planned in the Iraqi provinces of Basra, Nineveh and Kirkuk. Recent movements on the Iraqi political scene have clearly shown that the defense of the rights of Christian owners is not an exclusive of the Sadrist party. On Monday, November 22, Judge Faiq Zidan, President of the Supreme Judicial Council - the highest administrative body of the ordinary judiciary - received a delegation from the "Bablonia Movement", a political group that obtained, on October 10, four of the five reserved seats in the elections to parliamentarians of Christian faith. The delegation (see photo) included Ryan al-Kildani, Secretary General of the Movement, and Evan Faeq Yakoub Jabro, former minister for refugees and migration in the outgoing government led by Mustafa al Kadhimi. During the meeting - the sources of the Supreme Judicial Council report - the interview focused exclusively on the problems relating to real estate owned by Christian owners and on the measures to be taken to protect their property rights.
On that occasion, the representatives of the Babylon Movement also expressed their full confidence in the work of Judge Zaidan.
At the beginning of 2021, as reported by Agenzia Fides (see Fides, 4/1/2021), the Iraqi Shiite leader Muqtada al Sadr had ordered the creation of a Committee in charge of collecting and verifying news and complaints regarding cases of illegal expropriation of real estate property suffered in recent years by Christian and Mandaean owners (the latter belonging to a religious minority that follows Gnostic doctrines) in various regions of the country. The intention of the operation launched by the Shiite leader was to restore justice and end violations of the property rights of the "Christian brothers", including those for which members of the Shiite movement led by al Sadr were responsible.
The request to report cases of illegal expropriations suffered was also addressed to families of Christians who had left the Country in recent years, with the request to send the committee by the end of next Ramadan.
The phenomenon of illegal abduction of Christian homes began thanks to connivance and cover-up on the part of corrupt and dishonest officials, at the service of individual or organised gangs of impostors and swindlers (see Fides, 23/7/2015). Such “legalised” robbery of properties belonging to Christian families was closely connected with the exodus en masse of Iraqi Christians, which has intensified since 2003, following US led military interventions to topple the regime of Saddam Hussein. Swindlers took possession of homes and land left empty relying on the fact that there is little probability that the owners will ever return to reclaim the properties in question.
Now, the moves of the "Babylonian Movement" let us imagine that even the protection of the properties of Iraqi Christians may soon become a terrain of competition between opposing political groups and blocs. A "competition" that does not however seem to free itself from the temptation and illusions - cultivated in different environments and ways - of making the present and future of Christians in Iraq and the Middle East fully depend on the guaranteed availability of access to money and real estate and from the claims of its socio-political relevance.
Forgetting - as Palestinian Archbishop Michel Sabbah, Patriarch Emeritus of Jerusalem of the Latins recently suggested in prophetic words - that the questions and also the uncertainties about the future of Christians in the Middle East "are not primarily a question of numbers, even if numbers are important, but they are a question of faith". (GV) (Agenzia Fides, 25/11/2021)