AFRICA/SUDAN - The President of the Bishops' Conference: "We hope for a new beginning" 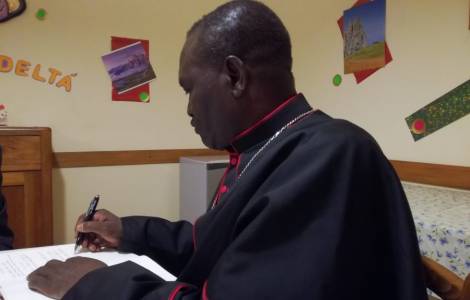 2021-11-13
Bishop Tombe Trille: "After the coup d'état, it is urgent to support dialogue. The pastoral mission is seriously affected"

Khartoum (Agenzia Fides) - "We hope that it is truly a new beginning. We must thank the international community for the support given to the civilian government, the Sudanese demonstrators and all those people who worked so that the Prime Minister can be reinstated. We are facing with yet another compromise between the military and Hamdok, who declared that he had agreed to return to the leadership of the executive, in order not to disperse what was achieved in the previous two years, putting an end to the violence and the bloodshed that had been going on since the October 25 coup". This is the comment made to Fides by Mgr. Yunan Tombe Trille, Bishop of El Obeid and President of the Bishops' Conference of Sudan and South Sudan, the day after the announcement of a new pact signed between civilians and military (see Fides, 24/11/2021). On November 21, Prime Minister Abdulla Hamdok, under house arrest since the first day of the coup and released only on Saturday, November 20, announced that he had reached an agreement with General Abdel Fattah al-Burhan, army chief and leader of the putschists, to form a "technical government". The Bishop noted: "Hamodk will set up a new technical executive which should lead the country peacefully towards elections in 2023. For weeks, the military junta has been under pressure from the international community, which has been asking for Hamdok to be released and reinstated as Prime Minister. In the meantime, more than forty civilians have died, all among the demonstrators, killed by the security forces in a month of military power". The population has welcomed the news of the agreement with different reactions: there are those who breathe a sigh of relief and are already thinking about the composition of a new government with at least 50% of civilians and those who, on the other hand, cry out to betrayal. "The people - concludes Mgr. Yunan Tombe Trille - are divided. Some do not want any kind of agreement with the military, who withdrew only under pressure from the international community and did not even express words of repentance for the killing of innocent people; others do not want to give the Prime Minister time to work in peace and lead the country into the international community. Now there is only a first agreement. The military will retain all the privileges and power held during the previous dictatorship and will hardly leave them to favor a path of democratic transition. Experience shows that, in the past, many agreements were signed which were then rejected by the military. The hope is that the nation can experience a new beginning in the name of peace and democracy". (LA) (Agenzia Fides, 25/11/2021)