AFRICA/SUDAN - A new phase of "government experts": hope for a return to democracy 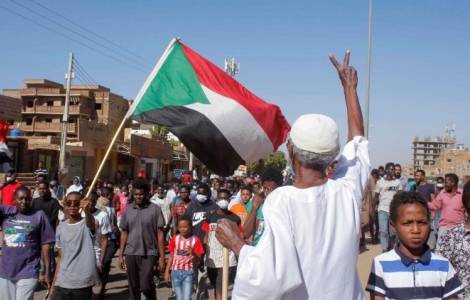 2021-12-02
The commitment of Comboni missionaries: helping refugee minors from South Sudan to return to school

Khartoum (Agenzia Fides) - The coup in Sudan, which forcibly overturned the transition council established in August 2019 in the wake of the so-called "Sudanese Spring", ended less than a month later. On Sunday, November 21, Prime Minister Abdulla Hamdok, who had been under house arrest until the day before, announced as a free man an agreement with General Abdel Fattah al-Burhan - army chief and leader of the coup leaders - to form an "government of experts" This opens a new phase that gives hope to restore a democratic transition path triggered in the first months of 2019 when, without particular bloodshed, the "Sudanese revolution" - largely carried out by women and young people - put an end to the regime by Omar al-Bashir. The dictator, who came to power in a 1989 coup supported by the extremist leader Hassan al-Turabi and stayed in power for 30 years in Sudan, immediately made his autocratic and disrespectful intentions clear to the world. The agreement reached threatens to fail immediately: twelve ministers of the interim government, including the influential Mariam al-Sadiq al-Mahdi, head of the foreign ministry and daughter of the famous Sadiq al-Mahdi, resigned in "protest against the agreement with the military" signed. Meanwhile, thousands of Sudanese took to the streets an hour after the agreement was announced to express their dislike of the army and, for the first time, Hamdok, who is considered a "traitor". "There is little confidence that Hamdok can reform a new executive branch with 50% civilians and get through this phase, a local observer who prefers to remain anonymous told Fides the failure to establish a dictatorship in Sudan is good news, but too many questions remain as to who will take over the scepter from now on". The month in which the coup took place, in addition to political aftermath, leaves a heavy legacy: more than 40 deaths, a far higher number of wounded and mass arrests. "The fact that the old rulers hang around in Khartoum or exercise their influence", the observer continues, "arouses many fears; in the new equilibrium it will be necessary to understand who will sit in government". The people in question include Salah Gosh, former director of national security, charged with crimes against humanity and now living in exile in Egypt, as well as Mohamed Hamdan "Hemeti", former leader of the Janjawid, a paramilitary group who committed the massacres and accused of war crimes. There are also fears that Omar al-Bashir, who is about to be released from prison (next December) and has never left the political arena, will return. (LA) (Agenzia Fides, 24/11/2021)