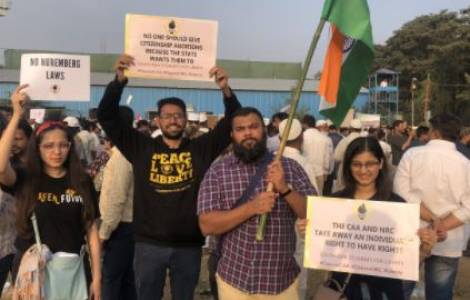 New Delhi (Agenzia Fides) - "On November 26th, we celebrate Constitutional Day in India. We must internalize the letter and the spirit that our constitution fathers gave us in 1949 and make it our own. This great Charter must be respected, protected and implemented in every detail for every single citizen of our country and especially for those whose rights and freedoms are trampled on", emphasizes the Indian Jesuit and writer Cedric Prakash, who is committed to the promotion of human and social rights. "Thanks to the tireless struggle and the great sacrifices of the peasants", continues the Jesuit, "three laws have now been repealed. Their protests lasted for more than a year, with blood, sweat, hardship and tears. They did not succumb to threats and intimidation, to derogatory remarks. The government and part of the population were hostile towards them.
Most of the media ignored them. But the farmers continued and triumphed. That is a lesson we must all learn". "The nation still has many critical and urgent problems to solve", continued Father Prakash. First, the well-known 'Unlawful Activities Prevention Act' (UAPA) should be repealed immediately. It is used as a weapon to intimidate and harass, imprison and kill, as we have seen in the case of Father Stan Swamy and is used to silence dissenters and to fight against those who stand up for truth and justice, against those who support the rights and freedoms enshrined in the Indian Constitution; against those who accompany Adivasis and Dalits; against those who demand greater freedom of speech and expression".
According to Father Prakash "the Citizenship Amendment Act should also be withdrawn. These measures are clearly discriminatory and contrary to the letter and spirit of the Indian Constitution". The Jesuit recalls: "We then have three bills on the Labor Code approved by Parliament in September 2020 that must be abolished. Ordinary workers in our country have suffered immensely from the pandemic. Several provisions of the Codes violate workers' rights; furthermore, the process by which they were approved was not very transparent. All the central unions had opposed and presented their objections on several occasions. The government, however, did not give in.
The farmers show us that these Codes can be repealed if the trade unions are organized and united". Father Prakash calls for respect for the rights and dignity of the Adivasis and indigenous tribes who live in the forests, referring to the intention of the Ministry for the Environment, Forests and Climate Change to change the existing laws, to facilitate investment by multinationals and government concessions for logging and mining. "More than two million forest dwellers are threatened with forced relocation and the loss of their livelihood if they lose their habitat". Father Stan Swamy and others "fought for these rights denied to the Adivasis" while continuing to destroy the environment and precious biodiversity, the Jesuit said. Finally, Father Prakash said, "the 2020 National Education Policy as it stands is grossly undemocratic and unconstitutional in that it makes important decisions in the field of education that is a state-owned policy. In addition, this policy is designed to satisfy the Indian elite and exclude poor and disadvantaged groups". (PA) (Agenzia Fides, 23/11/2021)

ASIA/INDONESIA - Pastoral care of "agroecology" to build the "common home"