AMERICA - Protagonists and co-responsible for evangelization as "Missionary disciples" 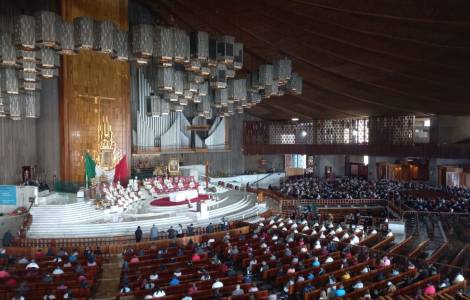 Mexico City (Agenzia Fides) - The Church of Latin America and the Caribbean gathered at the feet of the Virgin of Guadalupe on the Solemnity of Christ the King, Sunday, November 21, for the opening of the Ecclesial Assembly of Latin America and the Caribbean, which will last until November 28 ... ..
The president of the Council of Latin American Bishops (CELAM), Archbishop Miguel Cabrejos of Trujillo, invited the approximately 1,000 participants in the meeting, including the delegates present in Mexico City and the virtual participants to give "thanks be to God for this new experience of living, of feeling and participation "in the life of the Church. In his homily, the Archbishop stressed that the Ecclesial Assembly took place following "a long journey together, listening to everyone and felt how beautiful it is to be members of the mystical body of Christ, protagonists and co-responsible for evangelization as missionary disciples". He then asked God to open the hearts of the participants to allow themselves to be guided in a spirit of listening, synodality and ecclesial unity, and to discover what He wants to tell us as his people on a journey.
Archbishop Cabrejos underlined that it was a historical Assembly, "because instead of holding the 6th General Conference of Bishops, Pope Francis proposed this Ecclesial Assembly, consisting of representatives of the entire people of God". We are witnessing "the transition from an assembly in which only the Bishops participated to a fully ecclesial assembly". "We are united in the diversity of ministries and charisms", he continued, highlighting that this Assembly inaugurates a new synodal body at the continental level, which places episcopal collegiality at the center of ecclesial synodality. He also asked Our Lady of Guadalupe, patroness of Latin America, to show the path that God desires for his Church in the region and to be ready "to undertake a process of permanent conversion, in communion with the Second Vatican Council and Pope Francis, on the way to the Synod on Synodality, and the Jubilee of the Guadalupan event (2031) and that of Redemption (2033)".
Pope Francis addressed the participants in a message in which he underlined the importance of this event in revitalizing the spirit of the Aparecida Conference with a view to the Synod of 2023 to promote a "synodal awakening" in the Church. In a special way, Pope Francis called on the Church to listen to one another and to hear the cries of the poor and forgotten. Furthermore, may she "overflow with the creative love of the Spirit which urges us to go out without fear to meet the last, and animate the Church so that through a process of pastoral conversion, she may be ever more evangelizing and missionary". (SL) (Agenzia Fides, 23/11/2021)