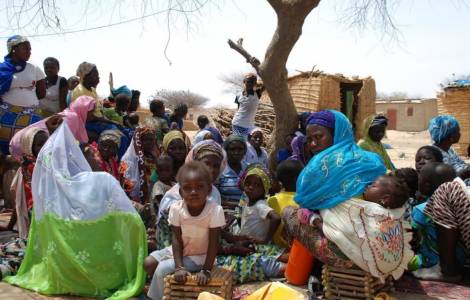 Ouagadougou (Agenzia Fides) - "The security situation in the country is worsening day by day, armed groups are advancing and the army is being attacked again and again. And they are subordinating the population to their will". The testimony, reported by RECOWA-CERAO, the Regional Episcopal Conference of West Africa, is from Father Etienne Tandamba, a priest in the diocese of Fada N’Gourma, in Burkina Faso. "Kidnappings and confiscations are the order of the day", reports the priest, "and some areas are completely inaccessible. Schools remain closed, as do some chapels, and the state of the city administration is precarious". Government seems to have lost control of the situation. After another attack that killed 49 soldiers and four civilians on Sunday, November 14th - according to observers, it was a jihadist attack near the city of Inata in the north of the country - the President of Burkina Faso , Roch Marc Christian Kaboré, pointed out "significant malfunctions" in the army, to which a bad strategy to contain clashes with terrorists can be traced back. He added that he understood "the anger" that was being displayed in many parts of the army. Despite these challenges, which arise from the serious situation, "the Church - Father Tandamba remarks - is resilient. We will continue to pray and find ways and means to share the good news and care for Christian communities. We are doing everything in our power to reach the poor, especially the internally displaced". Father Tandamba, who is also Director of Communications in his diocese, then added that through radios and all forms of communication the Church seeks to strengthen social cohesion and religious tolerance as well as dialogue. Meanwhile, thousands of citizens across the country are calling for the resignation of the government, which is considered incapable of providing Burkina Faso with adequate levels of security. The political crisis in which the small West African state finds itself offers fertile ground for terrorist groups with links to IS or al-Qaeda to spread in the Sahel. "Our challenges - concludes Fr. Tandamba in the note reported by RECOWA/CERAO - are immense but we believe we can do it". In Burkina Faso, a series of terrorist attacks has rocked the country since 2015, particularly in the areas in the north and east, the so-called "three-country region", on the border with Mali and Niger. In some cases, jihadist violence is mixed nter-community violence. Over six years, clashes have killed at least 2,000 people and forced 1.4 million to flee. (LA) (Agenzia Fides, 23/11/2021)