ASIA/SRI LANKA - Catholic priest stopped by the police: he asked for truth and justice on the Easter attacks 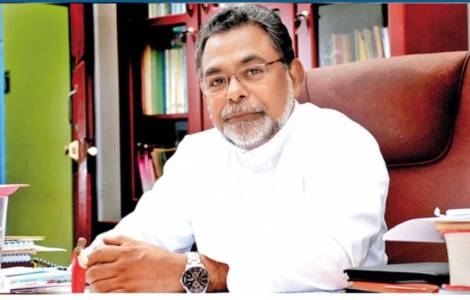 2022-01-14
One thousand days after the Easter massacre: day of commemoration

2021-11-22
Catholic priest stopped by the police: he asked for truth and justice on the Easter attacks

2021-10-11
Resignation and appointment of Bishop of Kandy

2021-09-08
Cardinal Ranjith: "The government has a duty to promote truth and justice on the Easter massacres, with a transparent investigation"

2021-07-24
Day of indigenous clergy and contribution to the Pontifical Society of St. Peter the Apostle

Colombo (Agenzia Fides) - "We have been here for three days to accompany our brother Fr Cyril Gamini Fernando, called by the Intelligence services to be questioned. They ask him for an account of the statements he made on the responsibility of the Intelligence relating to the Easter explosions of 2019. We are here representing the priests of the Archdiocese of Colombo. We are here in prayer, with the Rosary in hand, expressing solidarity with Father Cyril, and asking God that the truth come to light and that there be authentic justice. We call on all the faithful to pray with us": said to Fides Fr Robinson Wijesinghe, part of the group of Catholic priests of the Archdiocese of Colombo who is holding a sit-in of peaceful protest and silent prayer in front of the Crime Investigation Department of the capital Colombo, where Fr. Cyril Gamini Fernando, a priest of the same Archdiocese, is being held for investigations and interrogations.
While the whole Church in Sri Lanka has asked politics and law enforcement to clarify and truth about the instigators of the 2019 attacks (see Fides, 8/9/2021), Father Cyril was denounced and summoned for his statements that called into question the role and the flaws of the Intelligence Services.
Father Cecil Joy also present adds to Fides: "the whole diocese of Colombo asks for justice and truth. We recall that in 2019 more than 200 people died and more than 500 were injured due to the terrible attacks. After more than two years we are still here asking for the truth. One of our priests, Father Cyril, was summoned because he publicly asked for the truth to come to light: the truth is a right of the victims, it is a duty of the state. The international community must know. We ask all the faithful to pray for us and with us. We are gathered in the name of God as believers, in search of the truth". Fr Cyril Gamini Fernando is a member of the "National Catholic Committee for Justice for Victims" of the 2019 Easter attacks. A month ago, the director general of the state intelligence service, General Suresh Salley, filed a complaint against the priest for the statements made by him.
In Sri Lanka on April 21, 2019 three luxury hotels in Colombo (Cinnamon Grand, Kingsbury and Shangri-La), and three churches (St. Anthony's, Colombo, San Sebastiano, Negombo and Church of Sion, Batticaloa) were hit by kamikaze attackers. Two more bombs exploded, one at a house in Dematagoda and another at the Tropical Inn in Dehiwala.
In addition to the eight suicide bombers, 269 people were killed in the attacks, including 45 foreign nationals, while at least 500 were seriously injured. The suicide bombers were identified as being associated with the National Thowheeth Jama'ath (NTJ) organization. Regarding the reasons, the people behind the attacks, the lack of intervention by the police and intelligence, despite the warnings received, there are many unknown factors and, after two years, public opinion is still waiting for clarity and truth. (PA) (Agenzia Fides, 22/11/2021)

ASIA/CHINA - Christmas lights are turned on: the Catholic community intensifies its spiritual journey and its works of charity

AMERICA/EL SALVADOR - Massacre of Jesuits: Film reconstructs what happened in 1989 and what is still happening today