ASIA/KAZAKHSTAN - A "linguistic revolution" for evangelization 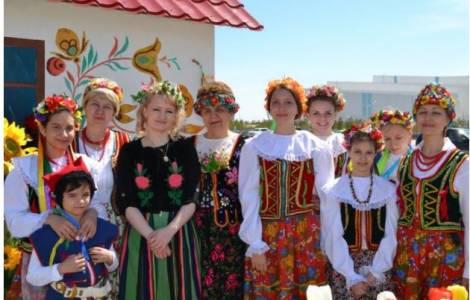 2022-01-11
After riots in Almaty: “Many parts of the city are completely devastated”

2022-01-10
Bishop dell’Oro thanks for the words of the Pope during the Angelus prayer: "We join the prayer"

2021-11-12
The Bishop of Almaty: "We would be happy to welcome Francis, twenty years after the visit of John Paul II"

Astana (Agenzia Fides) - One of the future challenges of evangelization in Kazakhstan is the gradual transition to the Kazakh language. Father Leopold Kropfreiter (SJM), National Director of the Pontifical Mission Societies in Kazakhstan, emphasized this to Fides. "In the past, due to the large presence of Polish deportees, many congregations prayed in Polish", he explains.
"It was later realized that it was necessary to pray in Russian as well. Today a new linguistic revolution is needed for the Church in Kazakhstan: There are fewer and fewer people of Russian and Polish origins, and if we want to talk to young people, we have to do it in Kazakh".
Fr. Leopold Kropfreiter SJM spoke at the latest webinar on "The Mission of Evangelization in Central Asia at the time of Evangelii Gaudium. Context, Difficulties, Perspectives" and recalled on this occasion: "When I was appointed National Director of the Pontifical Mission Societies in Kazakhstan in 2016, I was not sure what my role was: I thought it was fundraising for the mission, but then I realized that it was not just about that, but that I had to take care of revitalizing missionary awareness: I have tried to do this every day since then, visiting churches and parishes, translating and spreading the message of the Gospel and setting up various projects that represent an important space for meeting those who do not yet know the Church. One of these is aimed at young people, for example, and aims to support people of the same age in difficulty".
The National Director explained the work of the Pontifical Mission Societies with a view to supporting missionary work in Kazakhstan, pointing out that the first form of support would be to create opportunities for priests, religious and nuns to meet and exchange ideas over a wide geographic area such as Kazakhstan. For this reason, a special annual “Pilgrimage of Missionaries” was launched: "It is a moment that allows us to compare the experiences we have in everyday life. At one of these encounters, for example, I heard the testimony of a priest who works in a very small mining village: On New Year's Eve, his neighbors noticed that he was alone and invited him to celebrate with them. From that moment on, a friendship was born that enabled the head of the family, with the help of the priest, to overcome his alcohol addiction and thus improve his relationship with the rest of the family. That story has taught us all that the gospel can be preached in many ways and in many circumstances". There are four Catholic dioceses in Kazakhstan with a total of 70 parishes and 91 priests, including 61 diocesan priests and 30 religious. The Catholics are a small minority: According to official information from the Kazakh Foreign Ministry, of the more than 17 million inhabitants of the country, about 26% are Christians, of whom 1% are Catholics. (LF-PA) (Agenzia Fides, 20/11/2021)