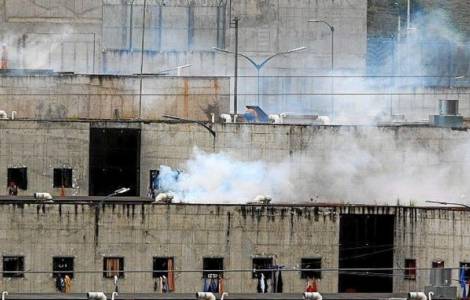 2021-11-16
Still inhuman violence in prisons: "We all have to take responsibility"

2021-10-06
“Put an end to violence”: prayer and reflection on the value of human life in all its expressions

2021-07-08
Day of Native Vocations: "May no vocation be lost due to lack of economic resources"

2021-07-06
Resignation and appointment of vicar apostolic of Esmeraldas

2021-06-18
Day of the Missionary Ad gentes: "the light of the Gospel that we bring will be able to illuminate the dark night of the peoples"

Guayaquil (Agenzia Fides) - "It is important that the social consciousness of a people deals with the state of the country and is not satisfied with saying that the government is responsible for the order in prisons, because that does not remove us from the fact that we are all citizens and we all have to take responsibility", said Bishop Rafael Cob Garcia, Vicar Apostolic of Puyo, after violence broke out again at the weekend in Guayaquil prison, where 25 were injured".
According to the Bishop, every citizen is called to wonder what individuals can do to reduce the number of prisoners in prisons, less violence on the streets and in families, less drugs among adolescents and adults, in schools and on the streets, more prevention of drug use and more values to education for young people and children.
The drama of repeated violence in the prisons has been condemned several times by the local Church: the board of the Bishops' Conference issued a statement entitled "Cease violence!" after the tragic events in Guayaquil Prison on September 30, where 116 inmates died and another 80 were injured due to violence" (see Fides 6/10/2021).
"Inhuman and sadistic violence", complains the bishop, "which dominates the minds of criminals and prisoners, violence that transcends all limits that a person can imagine". So he asks himself, "and what is the root of this violence? The idol worship of money that moves so many people from all walks of life, rich and poor. We do not understand how these extremes can come about and how a government is still not in a position to contain and stop this violence that causes so much suffering and death in our country". The Apostolic Vicar of Puyo underlines in his speech sent to Fides, that when the human being does not respect the first sacred right, the human life of a being similar to him, "when the other is seen as the enemy to hate and eliminate because it threatens my territory", then the spiral of violence ignites, like a fire that seems impossible to extinguish". "The problem is serious for the government and for the whole country", affirmed the bishop, calling for the application of state measures "with urgency and priority over other economic or social problems, because life and peace are the most important things for the life of a people". "No one has said that fighting evil is easy, especially when that evil is wrapped in the armor of drug trafficking", said the bishop. "May God, who will judge us all if we have loved him in our neighbor", he concludes, "give us the wisdom and strength not to be indifferent to those who suffer violence to defend life and the common good". (SL) (Agenzia Fides, 16/11/2021)