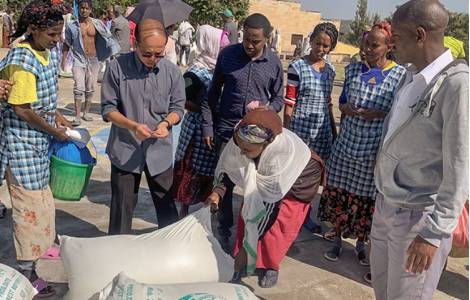 2023-02-07
Apostolic Prefect inaugurates neuro-psychiatric clinic: In the footsteps of Mother Teresa of Calcutta

Addis Abeba (Agenzia Fides) - There are 14 people still held in custody by the Ethiopian police, including Salesian religious, brothers, laity, employees.
Seven other Salesians, plus an employed woman, were released by the police on Saturday, November 13, and this morning they appeared before a court and, according to local sources of Fides, they should be released on bail.
In recent days, among the many stopped by the agents, the 80-year-old Italian Salesian coadjutor Cesare Bullo (the "Salesian coadjutor" is a consecrated layman, who lives in the religious community together with the religious, ed) was arrested and then released, while Alberto Livoni, humanitarian worker of VIS (International Volunteer for Development), was detained for eight days and then released.
"We are happy to learn of the release of some of our missionary brothers" - says the Bishop of Hosanna, Seyoum Fransua, director of the Pontifical Mission Societies in Ethiopia to Agenzia Fides. "This news is a first joy for all of us", he says, hoping for a quick release for anyone still in the custody of the authorities.
According to Fides sources, the government is promoting a control of the realities of international cooperation - also linked to the Catholic Church, as are the various activities of the Salesian Family, (see Fides, 12/11/2021) - to ensure that they do not promote political activities and do not support rebel groups.
Meanwhile, in a very difficult social context, Salesian works continue to support young people and their families, while conditions worsen due to the armed conflict that has lasted for a year in the Tigray region between the Ethiopian Army and the Front of liberation of the people of Tigray. Aid promoted by Salesian social works reaches 8,000 families, paying particular attention to mothers and malnourished children.
Acute malnutrition increases every day. Almost half of pregnant and lactating women suffer from acute malnutrition and lack health care due to the number of hospitals destroyed. According to the UN, the famine generated by the war could kill 100,000 children in the coming months, when three out of four people will not have access to food. The United Nations Office for the Coordination of Humanitarian Affairs (OCHA) reports that 400,000 people are exhausted and on the verge of starvation. Another 7 million people need help to survive in the Tigray, Amhara and Afar regions. The conflict is estimated to have caused two million internally displaced persons and more than 100,000 refugees to flee to Sudan.
In a context of serious emergency, Salesian missionaries, lay people, volunteers continue to provide education, humanitarian aid and support to young people and their families, also thanks to aid from all over the world. The Salesian Mission Office of Madrid has re-launched the appeal for "The Ethiopian Emergency", reporting the appeal of a religious who says: "People of all social conditions are knocking on our doors. Rich and poor ask for food to survive". "The Salesian missionaries - he reports – spent more than three months isolated in their works in Mekelle, Adigrat, Shire and Adwa, but they did not stop helping the population with what little they had". "The need for food increases every day and any help that arrives will save the lives of many malnourished. We are grateful for the solidarity received from donors around the world. Let us try to give hope to the most hoped-for", say the religious in Ethiopia. Ethiopia is one of the poorest countries in the world with over 38% of its population living in poverty and 75% of the population does not have access to education. (PA-EG) (Agenzia Fides, 15/11/2021)

ASIA/INDIA - Young Catholics: celebrate Christmas with works of mercy, to "feed the hungry"