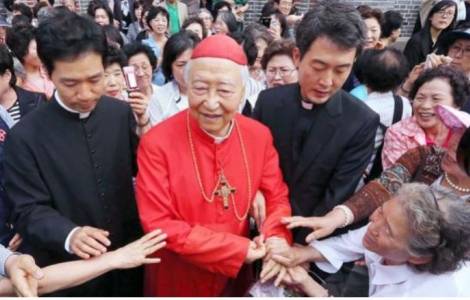 Seoul (Agenzia Fides) - "Nicholas Cheong Missionary Scholarship Foundation": South Korea’s Seoul Archdiocese has launched a new missionary society in memory of the late Cardinal Nicholas Cheong Jin-suk, former Archbishop of Seoul and apostolic administrator of Pyongyang. As explained in a note sent to Fides by the Archdiocese Communications Office, the new Foundation will guarantee scholarships and "will be a cornerstone of pastoral care to support lay missionaries and artists" in their mission to announce the Gospel with words and deeds. The initiative, which is expected to last at least 10 years, until 2031, the centenary of the birth of Cardinal Cheong, was born because the Cardinal always emphasized the importance of the missionary vocation of the whole Church and the role of evangelizer of every baptized person.
In recent months, the Archdiocese had conducted a survey among lay missionaries, in preparation for the project, and the survey revealed that most of them face challenges of various kinds: in this sense, scholarships can help them pursue their formation and their mission in reaching the people of the whole world with the Christian message of love and salvation.
Scholarship recipients will be selected from among Korean Catholic lay missionaries who are currently overseas to serve and evangelize communities in Southeast Asia and other countries. Each candidate will be evaluated by a special Committee, and the winners will be awarded in an annual scholarship award ceremony on December 6, the feast of St. Nicholas.
Furthermore, the Foundation intends to organize a "Support Center for Catholic Arts and Culture" which offers Catholic artists financial resources and organizational support such as public relations, legal assistance, various assistance and consultancy services.
The roots of the project lie in a meeting between Cardinal Cheong and a Korean Catholic actress, Maria Magdalena Ji-young Kim, during the premiere of a film 10 years ago. The woman was very impressed by what the late Cardinal said: "Mission has always been the essential point of reference for me when it comes to words and deeds". The woman later went to Father Matthias Young-Yup Hur, spokesman for the Archdiocese of Seoul - and today President of the "Nicholas Cheong Missionary Scholarship Foundation" - and donated 34,000 US dollars as a contribution to support the missionary work of Cardinal Cheong. From this first donation, the idea of making this missionary assistance more structured was born, by creating a special Foundation. Cardinal Yeom, today Archbishop Emeritus of Seoul, went to visit Maria Magdalena Kim in the hospital, before the woman's death, discussing these issues again. This is how the Foundation's project took shape. Cardinal Cheong was born in Seoul in 1931. He was ordained a priest on March 18, 1961 and studied at the Pontifical Urbaniana University, obtaining a Licentiate in Canon Law. He was Archbishop of Seoul and Apostolic Administrator of the Diocese of Pyongyang for 14 years, when he was appointed after the late Cardinal Stephen Kim Sou-hwan (1922-2009). Pope Benedict XVI elevated him to the rank of Cardinal on March 24, 2006. He died on April 27, 2021. (PA) (Agenzia Fides, 10/11/2021)

VATICAN - Pope Francis: in the face of de-Christianization, Saint Augustine is more useful than "modernization" plans