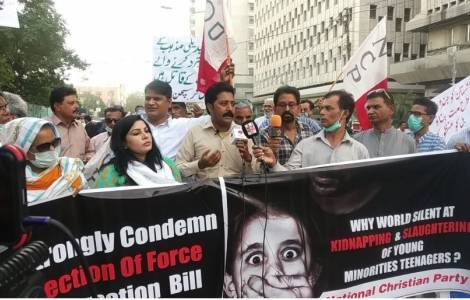 Karachi (Agenzia Fides) - "We must all be united to defend and promote the proposed bill to protect women of religious minorities from forced conversions. Not only do we want this proposal to become law, but we also want it to be implemented. Rejecting the bill that aims to stop forced conversions is against human rights. This refusal hurt our feelings, especially those of women belonging to religious minorities in Pakistan. It is the responsibility of the State to provide protection to its citizens, especially women and children, in the midst of the dangers to their lives and their peace of mind", said Tabassum Yousaf, a Catholic lawyer from Karachi, active in participating in the protest campaign after the rejection of the text of the law which intended to preserve the most vulnerable women and exposed to the phenomenon of kidnapping and forced conversion (see Fides, 14/10/2021).
Tabassum Yousaf, who in recent days took part in the protest together with other citizens at the Karachi Press Club, declares to Fides: "There already exists the 'law on child marriage' which prohibits the marriage of minors under 18; but when a minor girl belongs minority religious communities (Christian or Hindu) are kidnapped and forcibly converted and forced to marry a man two or three times older than her age, this law is ignored. It is a clear sign that there is no correct implementation of the law when it comes to non-Muslim women. There is a selective application of the law. It is serious discrimination".
The Christian, Shabir Shafaqat, president of the Christian National Party, who led the protest at the Karachi Press Club against the rejection of the bill, tells Fides: "We are fighting for our fundamental rights, we appeal to the Prime Minister, the judiciary and to the Chief of the Pakistani Army to ensure the protection of our women from kidnapping for forced conversions and forced marriages". And he notes: "Christians and Hindus feel insecure because of the rapidly growing kidnappings, due to forced marriages and forced conversions of teenagers belonging to religious minorities in Pakistan. State intervention is needed".
Various minority rights groups announced new peaceful protests in various cities of Pakistan on November 13, 2021. The Parliamentary Commission on Forced Conversions rejected the bill prepared by the Ministry of Human Rights and called this bill "non-Islamic" last month, on October 13, 2021.
The draft law in article no. 3 establishes that any non-Muslim, in order to convert to another religion, must request a "conversion certificate" from the first instance judge in the area where he ordinarily resides or carries out his business. The judge must set the date of the interview within 7 days of receiving the application and on the date indicated the personnel must be present to ensure that the religious conversion takes place in a free way, not due to constriction and is not due to any deception or fraudulent declaration.
The article further states that, at the request of the non-Muslim citizen, the judge can arrange meetings with scholars or religious leaders of the religion to which the person wishes to convert. The judge can grant a period of 90 days to undertake a comparative study of religions. Finally, it will be considered that the non-Muslim citizen has officially changed his faith starting from the "conversion certificate" issued by the judge. In article no. 4 of the bill, to prohibit forced conversion, provides that "whoever converts a person to another religion by criminal force commits the crime of forced conversion and is punished with a penalty of at least 5 years and a maximum of 10 years and a fine of at least 100,000 Pakistani rupees". Furthermore, anyone who carries out, leads, directs, realizes or in any way facilitates a marriage with the knowledge that one or both parties are victims of forced conversion is punished with imprisonment for a minimum of three years and a fine of 100,000 Pakistani rupees. Article no. 6 of the proposed law states that no person can change religion until he becomes an adult and if a minor claims to have changed religion before reaching legal age, this declaration is not considered valid. (AG-PA) (Agenzia Fides, 9/11/2021)

ASIA/INDIA - Missionaries of Charity accused of proselytizing: for Catholics it is pure defamation