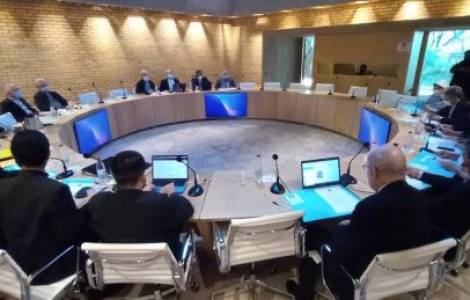 Asunción (Agenzia Fides) - The Paraguayan Episcopal Conference, gathered for its Ordinary General Assembly on November 1 and 2, expressed in a brief statement on November 3 "its deep concern for any action that weakens the independence of the judiciary and promotes possible political manipulation within the group of judges responsible for ensuring equity, jurisprudence, law and the correct application of national laws within the legal framework established by the National Constitution". The inclusion of Senator Victor Rios, currently active in politics, in the shortlist of candidates for the position of Minister of the Supreme Court of Justice is raising controversy in the country. The Cámara de Anunciantes of Paraguay (CAP) ruled against the appointment because "the possibility that a politician, member of one of the powers of the State, is appointed by his peers as a member of the high authority of another power is to say the least harmful and would create a disastrous precedent by allowing, with this appointment, the intervention of a political member in a collegial body which must be characterized by its independence and impartiality". The statement of the Bishops, sent to Fides, expresses "the surprise of the Bishops" and the request for "clarifications due to citizens, as well as respect for established procedures and the spirit that must prevail in any act involving the appointment of authorities, especially in the judiciary, a fundamental institution for democracy". Finally, the Episcopal Conference urges the legislators of the National Congress "to proceed with righteousness, to be authentic guardians of the integrity of the State Powers and guarantors of institutional credibility". During the General Assembly, the Bishops also confirmed the members of the previous presidency for the period 2021-2024, with Monsignor Adalberto Martínez Flores, Bishop of Villarrica, as President. Since the first months of the year, Paraguay has been overwhelmed by the effects of the so-called "Brazilian variant" of the Coronavirus, which has so far caused more than 16,000 victims and 461,000 infections, out of a population of 7.133 million inhabitants. The vaccination campaign started late and slowly, affecting the economic and social situation. As a result, a series of demonstrations took place across the country, demanding the resignation of the Head of State, President Mario Abdo Benítez, and to protest against the Executive's policy regarding the coronavirus. Municipal elections were held on Sunday October 10 to renew 261 municipal governments in the country, in a socio-political scenario marked by a high level of violence and acts of corruption, fueled by organized crime and drug trafficking (see Fides, 8/10/2021). A large part of the electorate (more than 40%) deserted the polls, for fear of fraud and intimidation. The elections were won by the ANR, known as the Colorado Party, in power since the 1954 coup and thus began preparations for the 2023 presidential elections. (SL) (Agenzia Fides, 4/11/2021)