ASIA/BANGLADESH - A Protestant Bishop: it is urgent to set up an interfaith teaching program in schools to fight intolerance 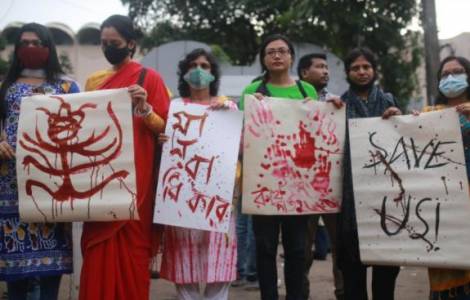 Dhaka (Agenzia Fides) - "I ask the Ministry of Education to include in the school curriculum a subject that touches on different religions, in the name of dialogue and harmony. This will help to put an end to religious violence", said Bishop Shourabh Pholia, Assistant Moderator of the "Church of Bangladesh" (Anglican) and Bishop of the Diocese of Barishal. The Anglican Bishop spoke at a meeting on the topic of interfaith harmony, held on October 31 in Dhaka. The program, attended by more than 200 people of different faiths, was organized by the "Bangladesh Tariqat Federation", a Sufi-inspired political organization, under the theme "Interfaith Unity for Peace and Harmony". In recent days, social media have reported an episode of interfaith violence between Hindus and Muslims. The alleged blasphemy went viral, and a mob of Muslims attacked the small Hindu community of Comilla while celebrating Durga Puja, a major Hindu religious holiday. The incident left at least seven dead, including two Hindus, and the resulting tension and chaos swept through several towns in Bangladesh. Muslim Iqbal Hossain was later arrested and admitted to orchestrating the incident. He is now awaiting trial.
Bishop Shourabh Pholia said: "I am saddened that, as we sit here together as different religious leaders, we speak of harmony and unity; but when we deliver speeches in our places In worship, some of us give speeches that stir up intolerance. This way we do not follow the teachings of God. This should not happen. In Bangladesh, some religious leaders deliver hate speech or disseminate such content on social media, noted Bishop Shourabh. "So many young people attack minorities of other faiths", he added.
"We must then consider", he continued, "that religious leaders have the task of teaching their own faith, but also of teaching the faithful to respect other people of faith. In the Christian seminary, in the madrasa (religious school for Muslims), respect for other beliefs and interfaith harmony should be studied, as no religion teaches to hurt people of other beliefs. The Bishop said: "We are the educators of the children. What we teach, they learn. So we must teach them to respect others. In school, we should teach values and morality. They must not learn that their own religion is the best, they must learn that there is only one Creator God. Quoting the Holy Bible, Bishop Shourabh Pholia said: "Almighty God created us in his own image. If we hurt other people, we are disobeying God. It is our responsibility to take care of the creation of God". In Bangladesh, a predominantly Muslim country, religious minorities are sometimes victims of violence. According to "Ain o Salish Kendra" (ASK), a Bangladeshi human rights organization that documents attacks on minority religious communities, more than 3,600 attacks against Hindus have taken place in Bangladesh since 2013. The study found that attacks on Hindus over an eight-year period included cases of vandalism and arson of 550 homes and 440 shops and businesses. During the same period, more than 1,670 acts of vandalism and arson of Hindu temples, idols and places of worship were also reported. (FC) Agenzia Fides, 4/11/2021)

AFRICA/MALAWI - Taking care of families in difficulty: the priority of the Catholic Women Organization

ASIA/PHILIPPINES - Bishop David: the Nobel Prize to Maria Ressa, a glimmer of hope