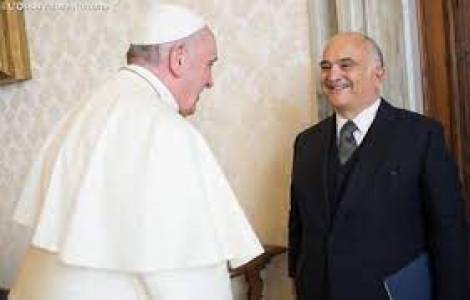 2022-12-20
A Christmas without celebrations or convivial events, after the bereaved events that affected the police

2022-05-25
76th anniversary of National Independence: the Churches renew their certificates of loyalty to the Hashemite Dynasty

Amman (Agenzia Fides) - The bloody attacks on places of worship that host communities of faith gathered in prayer or while taking part in ritual acts, represent the "summit" of justified atrocities and violence by bringing up "religious" issues. Faced with the continuing of these phenomena, it is necessary to encourage the creation of an interreligious and inter-cultural "global network", which works to protect the sites of worship and all the believers who frequent them, as a contribution to the development of a "common human civilization" nurtured by the recognition and sharing of "common human values". This is the urgency relaunched by the International Appeal for the protection of the Holy Places from all the violence and abuses that affect the various praying and worshipping communities.
The initiative is promoted by Jordanian Prince Hassan Bin Talal (pictured with Pope Francis), who chairs the Arab Thought Forum and also the Board of the Royal Institute for Religious Studies. More than 40 Muslim and Christian supporters joined the appeal, including senior members of the Middle Eastern community and representatives of academic, theological and cultural institutions of various countries.
The text of the appeal presents original contents, while moving within the horizon already outlined in the Document on human fraternity for world peace and common coexistence, signed on February 4, 2019 in Abu Dhabi by Pope Francis and the Sunni Sheikh Ahmed al Tayyeb, Grand Imam of al Azhar. In particular, the new appeal insists on the need to foster dialogue between the different confessional and cultural identities that values human reason and the sharing of common values. The attacks perpetrated against places of worship are linked to events that even in recent times have seen sites of cultural value, libraries and "other representative centers of Arab Islamic civilization" targeted, in analogy to what already happened at the immense Bayt al Hikma Library (House of Wisdom) in Baghdad, destroyed by the Mongols in 1258.
Religious sites are symbolic places "of our humanity, our history and the shared traditions of people around the world". And "without history we cannot sustain the future. History and its heritage are nothing more than a pillar of the present that we are trying to build". In our times - underlines the appeal promoted by Prince Bin Talal - the incitement to hatred and the conflicts that justify the shedding of blood continue to increase, "accompanied by the use of the abuse of religions and beliefs as a pretext for violence, exclusion and discrimination". "Historical and archaeological sites and architectural heritage, including museums, libraries and manuscripts" are also targeted, with the clear intention of "erasing the memory that preserves the civilizations of peoples and their core of value from extinction".
This fear and removal of the historical memory of peoples - the appeal argues - can be answered by recognizing and promoting "the concept of common human values", and experiencing that "contrary to what some might think, the concept of 'common human values' , in its deepest sense, does not weaken the specificities inherent in different religious beliefs", nor does it "conflict with cultural or national identities".
The list of Muslim and Christian exponents who have signed the appeal of Prince Hassan bin Talal include, among others, Professor Ali Muhyiddin Al-Qura Daghi, Secretary General of the International Union of Muslim Scholars (Qatar); Turkish professor Arshad Hormuzlu; Saudi professor Khalil al Khalil; Dr Ahmed al Khamlichi, Director of the Moroccan Foundation Dar Al-Hadith al Hassaniya; Lebanese scholar Nayla Tabbara, co-founder of the Adyan Foundation; Imam Yahya Pallavicini, President of the Federation of Italian Islamic Organizations; Dr. Martino Diez, Director of the Oasis International Foundation; Atallah Hanna, Greek Orthodox Archbishop of Sebastia; Bishop Emeritus Salim Sayegh, former Patriarchal Vicar of Jerusalem of the Latin for Jordan; Jordanian priest Rifat Bader, director of the Catholic Center for Studies and media. (GV) (Agenzia Fides, 3/11/2021)