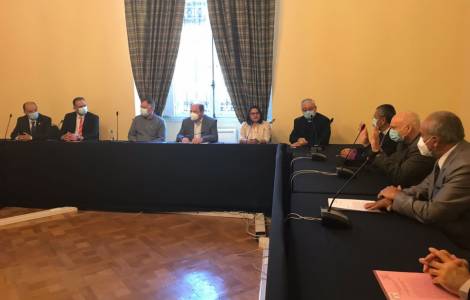 Villarrica (Agenzia Fides) - "The new Constitution must fully guarantee the religious freedom of all persons, without distinction of any kind, and also of religious denominations as such, that is to say the freedom to exercise their mission and their activities, both public and private, having as limits public order, morality and good customs". This point was underlined by His Excellency Francisco Javier Stegmeier, Bishop of Villarrica, commenting on the recent declaration of the representatives of eleven religious confessions, which indicates the aspects to be taken into account in the new Constitution in order to guarantee the human right to exercise one's religious beliefs, without hindrances or obligations on the part of the state. "The person is by nature religious and at the same time is a citizen, called to fulfill at the same time his religious and moral duties, and his social, economic and political duties", declares the Bishop of Villarrica, who lists three fundamental rights which must be guaranteed: the right of each religious denomination to regulate the marriage of its members; the education of children is the responsibility of parents; the right to promote social initiatives in accordance with their respective religious mission: schools, universities, hospitals, media, homes for children and the elderly, etc. On October 19, representatives of eleven religious denominations present in Chile handed to the Vice-President of the Convention, Rodrigo Álvarez, a document entitled "Considerations and Content Proposals on Religious Freedom in the New Constitution". This document contains elements considered essential and common to all the great expressions of faith present in the country, which should be taken into account in the current debate on the drafting of the new Constitution. His Excellency Bishop Juan Ignacio González, coordinator of this interreligious body, underlined: "This is a common document, relatively broad, in which are expressed the central elements of religious freedom, in particular the freedom of education, the freedom of teaching, freedom of marriage, among other things". The Bishop also recalled that religious freedom is present in other modern constitutions, adding that in order "to be able to regulate the religious phenomenon as a very important social factor in the life of a free, pluralist and democratic country like ours", it is necessary not to depend on State concessions for the development of religious action, an aspect which should be taken into account in the constitutional debate. (SL) (Agenzia Fides, 30/10/2021)