AMERICA - Emigration must be a right, not the forced consequence of poverty and violence 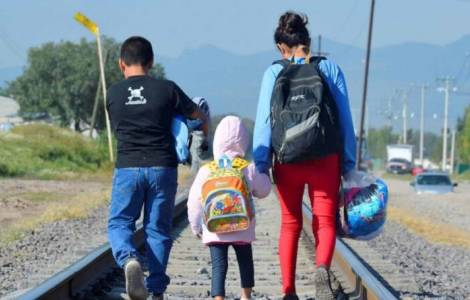 Valle de Ángeles (Agenzia Fides) - The VII Meeting of Bishops was held in Valle de Ángeles (Honduras) from October, 25 to 28, with the participation of the Executive Secretaries of the Pastoral Care of Mobility, lay people working on the southern borders of Mexico and Central America, a representative of the Vatican Migrants and Refugees Section and a group of US Bishops. According to the note released by ADN-Celam, everyone agreed that migration should be a right and not the consequence of the pressure exerted by various factors, such as poverty and violence.
"We ask for the application of migration policies that respect the dignity of people, the right to international protection and the non-separation of families by the governments of Central America, Mexico and the United States" is the request expressed by the participants. It was highlighted that Central America, Mexico and the United States are territories of origin, transit, destination and return of migrants, and rejecting the return mechanism set up by the administration of US President Joe Biden (see Fides 2/9/2021), urge the governments of Central America and Mexico to give a humanitarian, rapid and dignified response to the emergency caused by these measures which aim only at the containment and criminalization of the migrant population.
"As a Church - reads the document - we are committed to strengthening our regional structures to accompany and assist migrants, in line with Pope Francis' appeal to build 'an ever greater we'." At the same time, the commitment to urge the governments of the region, especially those of Mexico and the United States, is reaffirmed in order to address the structural causes of migration. In fact, structural violence forces Central American citizens to flee their countries every day, oppressed by economic conditions and insecurity. Furthermore, widespread corruption and impunity weaken the chances of building stable life projects in their countries of origin. The economic policies implemented by the governments of the countries of Central America and the United States, over time have weakened the states, forcing the population to emigrate in search of better living conditions.
The participants in the meeting underline that the phenomenon of migration constitutes a complex and regional crisis, which requires an immediate response and articulated work on the part of States and civil society.
The pandemic, the closure of borders and the effect of violent natural phenomena, have accentuated the presence of vulnerable populations, such as unaccompanied minors, pregnant women and single-parent family groups in the migratory routes. Currently these situations lack an effective and articulated response from governments, which must address the structural causes at the basis of emigration. (SL) (Agenzia Fides, 29/10/2021)

AMERICA/BOLIVIA - Caritas Bolivia will continue to help migrants at the borders with Peru, Chile and Argentina in 2022