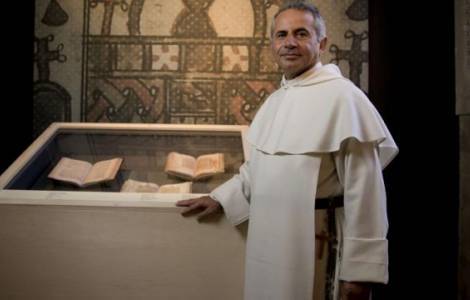 2022-03-14
Iranian rockets against US base in Erbil. The Chaldean Patriarchate: the stalemate in the formation of the government puts the country at risk

2022-02-15
Farewell to Mar Addai II, Patriarch of the Ancient Church of the East

Erbil (Agenzia Fides) - The old manuscripts and books, Christian and Islamic, saved in recent years from a possible destruction by the jihadists of the Islamic State (Daesh) will be collected and kept in a museum-study center created ad hoc by the will of the Bishops of the Chaldean Church. The decision to create this new conservation and exhibition center was taken by the Chaldean Bishops themselves during the meeting held on Saturday 23 October in Erbil, capital of the autonomous region of Iraqi Kurdistan, under the presidency of Patriarch Louis Raphael Sako. The museum will be built in Ankawa, a district of Erbil inhabited mostly by Christians, in a building adjacent to the institute which accommodates Chaldean priests and seminarians. The initiative will see the direct participation of the local community of Dominican Fathers, who have always been committed to the preservation and study of ancient books and manuscripts, which also represent a valuable testimony to the roots of indigenous Christian communities of apostolic origin in the lands of present-day Iraq.
The heritage that will flow into the museum was presented at the meeting of Chaldean Bishops by Najib Mikhail Moussa, the current Chaldean Archbishop of Mosul and member of the Friars Preachers. Before taking charge of the Chaldean Archdiocese in the city occupied for many years by Daesh jihadists in 2019, Father Najib Mikhail devoted much of his life to the care and study of manuscripts and texts the belonging to the ancient churches of the East collected by the Dominican Fathers.
Born in 1955 in Mosul, Father Najib Mikhail was since 1990 the director of the Center for the digitization of oriental manuscripts in the metropolis of northern Iraq. Until 2007, the heritage of thousands of manuscripts and ancient books in the hands of the Dominicans was kept in the complex of the Dominican Church in Mosul. That year, for security reasons, the most valuable works and the 850 oldest manuscripts in Aramaic, Arabic and Armenian were transferred to Qaraqosh, a predominantly Christian town 30 kilometers from Mosul. At the end of July 2014, the concern over the advance of the Daesh jihadists - who had already conquered Mosul on June 9 - convinced the Dominicans to start transferring the manuscripts and ancient books to the capital of Iraqi Kurdistan, to save them from the iconoclastic devastation and the burning of books perpetrated by the jihadists in the lands they occupied.
On the night of August 6-7, 2014, Father Najib Mikhail also fled with thousands of Christians from the Nineveh Plain to Erbil, taking a good number of priceless ancient manuscripts and documents in a van, while the cities of the Plain ended up under the domination of Daesh. In the years that followed (see Fides, 10/3/2018), Father Najib Mikhail had also involved dozens of refugees in Erbil in the work of restoring old manuscripts and books saved from possible destruction by the jihadists. The small cultural enterprise created by the Iraqi refugees was an important development in the work of protecting Iraqi cultural heritage, which has been carried out for centuries by members of the Order of Friar Preachers, founded St. Dominic of Guzmàn (1170-1221), engaged in those lands). During these difficult years, many refugees, Christians and Muslims, were able to acquire professional skills in this work of safeguarding the cultural heritage of the region. (GV) (Agenzia Fides, 26/10/2021)

EUROPE/UKRAINE - Camillian missionaries: "Make Christ present by bringing a sign of hope to the sick"