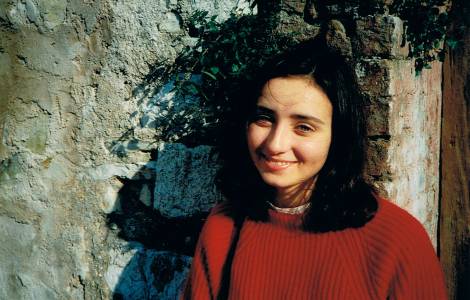 2022-07-25
Sister Luisa Dall’Orto: "Her dedicated life speaks with facts, with an echo that generates hope and spreads charity"

Rimini (Agenzia Fides) – Sunday, October 24, World Mission Sunday, a girl, Sandra Sabattini, will be beatified in Rimini. The rite, which had been scheduled months ago, was postponed due to restrictions resulting from the pandemic.
Spiritual daughter of Don Oreste Benzi, Sandra (1961-1984) breathed faith from an early age, as she lived with her family in the rectory of her uncle priest in Rimini. As a child, she always kept a rosary with her. The grandmother says that in the evening she found her granddaughter asleep in her bed with the crown in her hands. As a girl, she got up early in the morning, to meditate, in the dark, in front of the Blessed Sacrament, before others arrived at the church. At the age of 14, she participated in a stay of the Pope John XXIII Community in the Dolomites with severe disabilities, from where she returns with clear ideas: "We broke our bones, but those are people I will never abandon".
The Holy Father Francis in his message for this Mission Day recalls that "the history of evangelization began with the Lord’s own passionate desire to call and enter into friendly dialogue with everyone". This was Sandra's secret: she had a deep friendship with the Lord. An intense relationship that was revealed only after her death, when her writings were collected - which she pinned on scraps of paper, postcards, in school diaries, now collected in the book "Sandra's diary".
At the age of 16 she wrote: "Lord, you have given me a great gift: that of wanting to give my life to the poorest. I thank you for this, because although I have not yet exploited it, you have put this great gift in me. I hope to be able to make it bear fruit and I hope to be able to understand how".
One would think of a girl who, like so many young people, was thirsty for justice, except that on that same page of her diary, Sandra explains: "So now it is about one thing: choosing. Say: yes, Lord, I choose the poorest, now it is too easy, it is useless if then everything remains as before. No, now I say: I just choose You". An unusual gift of wisdom for such a young girl.
The theme of Mission Sunday 2021 is: "We cannot but speak about what we have seen and heard" (Acts 4:20). Sandra Sabattini was faithful to what she had seen and understood after that first holiday with the disabled in the Dolomites and in her short life she rolled up her sleeves. During high school she took care of the poor at home and made the whole parish community aware of the needs of disabled people. When the poor knocked on the door of the house she was not satisfied with the offer left by the family, but she ran after them and always tried to add something from her savings.
She lived for a while in a foster home. In the summer of 1982 she began volunteering in a drug addiction therapeutic community. At the beginning of the 1980s the drug problem emerged everywhere in its drama. Don Benzi's association had recently opened communities that could respond to the needs of many young people. Sandra had a great sense of justice. "If I truly love, how can one endure a third of humanity dying of hunger? she writes in her diary. While I keep my security or my economic stability? I would be a good Christian but not a saint. Today there is an inflation of good Christians while the world needs saints!".
After the high school scientific diploma you ask yourself: "Do you want to leave immediately for Africa or enroll in Medicine?" After a discernment with your spiritual director, Fr. Nevio Faitanini, and confirmed by Fr. Benzi, she enrolled at the Faculty of Medicine at the University of Bologna in 1980. She is divided between study, family, work and sharing with the poor. Despite the large amount of work she never neglects her studies: at each exam she obtained excellent marks.
On the morning of April 29, 1984, while she was going to a meeting of the Pope John XXIII Community, Sandra was hit by a car. She remained in a coma for three days and on May 2nd she died. She was 22 years old. On the last page of her diary, two days before the accident, Sandra left her spiritual testament: "This life is not mine that is evolving rhythmically by a regular breath that is not mine, enlivened by a serene day that is not mine. There is nothing in this world that is yours. Take care of the gift given to you, make it more beautiful and full for when the time comes". (LL/SL) (Agenzia Fides, 23/10/2021)