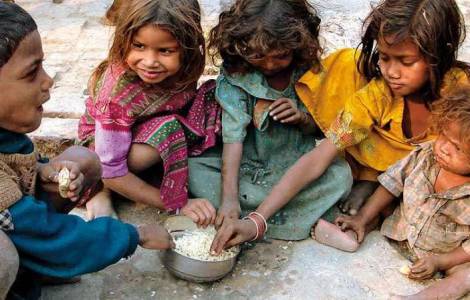 New Delhi (Agenzia Fides) - The fact that the poor have no food in India, despite the fact that the nation has plenty of it, is a patent injustice: highlights the Indian Jesuit Fr. Irudhaya Jothi SJ, scholar and promoter of the right to food, analyzing the situation of food security in the nation and touching on the issue of the peasants' protest.
The Jesuit notes to Fides: "India is in 101st place out of 116 countries in the Global Hunger Index 2021. Yet it is a land of abundance. For food reserves, we have much more than what we need to satisfy everyone's hunger and everyone could be fed in the country. "However, he notes, "food in India is not distributed proportionately. The paradox is that the government is planning to send food grains to produce ethanol (an organic chemical compound) because there are too many food grains. But then the government should give priority to people who lack food and suffer from hunger", says Fr. Jothi, who is also a social assistant.
"India is in a pitiful state in terms of food distribution, due to bad policies. The country is in the hands of large multinational corporations. And the policies adopted by the government are not pro-poor. It is a shocking and worrying situation", he notes. The government, he continues, should not compromise when it comes to hunger. "We are projecting ourselves as one of the shining and advanced countries of the world, while millions of people are lacking food", notes the priest, pointing out the contradiction. As recent data and studies reveal, the Covid-19 pandemic has worsened the hunger scenario in India and other parts of developing countries. "The Movement for the Right to Food has conducted the hunger survey in many states of India. The results of this survey have been presented to the government, but this does not pay attention to them", says Father Jothi, telling of families, who he knows personally, who suffer from hunger.
"People's hunger is a serious matter in India. This is what the Global Hunger Index 2021 says. We need to put pressure on the government to correct the agenda to support big companies, committing itself to the good of the poor. We demand that the government immediately distribute cereals to the poor. It is an urgent appeal", he says.
Fr Jothi also raised his alarm on the occasion of the "World Food Day" celebrated on October 16, in which many international organizations focused on the themes of poverty and hunger. According to world hunger statistics, 785 million people across the world (one in nine people) do not have food to sustain a healthy life. Most of them live in developing countries.
Food Day in India coincided with the farmers' protest, the longest in India's history, launched on November 26, 2020 in New Delhi and still ongoing. After the initial negotiation rounds failed, the Indian government refused to listen to the farmers' claims. "Anti-peasant laws must be repealed to protect Indian agriculture and millions of poor peasants from a complete takeover by large corporations", said Rakesh Tikait, leader of the Bharatiya Kisan Union, a major trade union in the sector.
In September 2020, the Indian Parliament passed a global agricultural reform through three separate laws, handing the sector over to large international agri-food companies. Indian farmers and numerous analysts and NGOs see the strong risk of implementing a system that will lead to further impoverishment (and therefore food crisis) of farmers. (SD-PA) (Agenzia Fides, 20/10/2021

EUROPE/POLAND - Distance adoptions of seminarians in mission lands: a project now in its ninth edition