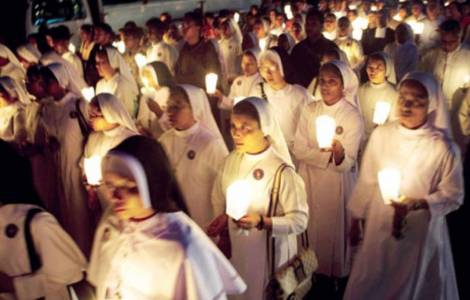 2021-12-01
Attacks on churches, the Bishop of Pekhon: it means "attacking the hearts of each of the faithful"

2021-11-10
A Catholic church hit by rockets, Baptist churches burned down

Mandalay (Agenzia Fides) - The Catholic Church in Myanmar regards the Synod as a "fruitful opportunity to reconsider its character as a Church on the move, which is really missionary": This is what the Catholic Dioceses in Myanmar affirm on the occasion of a solemn opening ceremony of the Synod of Bishops' path on the subject of Synodality, which starts on October 11, 2021 and will last until October 31, 2023.
In Mandalay, Archbishop Marco Tin Win emphasized the "deeply missionary dimension" of this synodal process and after the opening ceremony distributed burning candles to the participants as a sign of "being sent on a mission". In doing so, he urged everyone to be "missionaries of the light of Christ in families, cities and in society". Father Robert Kyaw Thu, a Burmese Catholic priest of the Archdiocese of Yangon, stressed that "the Synod is the best way to look within, to penetrate into our reality and to open the door for the participation and expression of all members of the Church, to build and develop a real missionary community". Speaking with Agenzia Fides, the lay faithful, above all, note that "according to our understanding, mission and evangelization in the Catholic Church in Myanmar are not yet well developed". Paul Mung Jang, a Catholic layman, affirmed that "the church is sometimes seen as a bureaucratic entity, far from the situation and the lives of the people in the many villages". Joseph Win Hlaing Oo joyfully welcomes "the Synod of Bishops on Synodality", and states that "it is an extraordinary opportunity for us to reshape the image and life of the Catholic Church and to strengthen the sense of belonging among all baptized who are called to mission".
Another Catholic, Joseph Myat Soe Latt, noted that "in Myanmar, although the laity are enthusiastic about the mission, the clergy and those in charge are often content with celebrating the liturgies and having a conservative understanding of pastoral care: there is a real need to walk together, to go out into the world to bring the Good News of the Kingdom of God". Celebrating and living a synod is an opportunity to strengthen the participation of the laity in the life of the Church and to involve all the baptized in evangelization, according to the representatives of the Burmese Church. In Myanmar there are around 700,000 Catholics in 16 dioceses, who are cared for by around 1,000 priests (both diocesan and religious) and over 2,000 religious. There are many vocations to the priesthood and consecrated life. Above all, the church is committed to the poor in the country. Myanmar is a predominantly Buddhist country with an estimated population of 55 million people and 135 different ethnic groups. 88% of the population are Buddhists, more than 6% Christians (including 700,000 Catholics) and around 4.2% Muslims (including the Rohingya) as well as Hindu and animist minorities. (JZ-PA) (Agenzia Fides, 19/10/2021)

AMERICA/PARAGUAY - Year of the Laity: promoting formation, communion and the missionary spirit of the laity

AMERICA - Protagonists and co-responsible for evangelization as "Missionary disciples"