AFRICA/CENTRAL AFRICA - "Here being a priest counts, people welcome you with respect and offer to help you": missionaries ready to share the Gospel 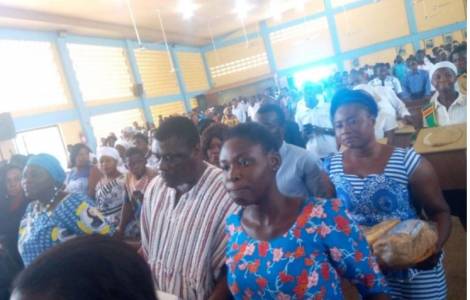 Bangui (Agenzia Fides) - "It is still a bit early to express my assessments and impressions, because in reality, since I have been here, I have moved very little from our house of the Society for African Missions (SMA) in Bangui", writes Fr. Davide Camorani, SMA missionary who was ordained a priest on July 24 and arrived in the Central African Republic on September 21, to supervise the first SMA mission in the country together with his confrere Fr. Michele Farina (see Fides, 3/8/2021). Now Fr. Davide wants to share his first weeks in the Central African country. The Italian missionary shares his enthusiasm for evangelization. "I noticed that being a priest counts here, that the people receive you with respect and offer you their help", said the religious, who told of his arrival at the airport in Bangui: "When I got off the plane, the policewoman who was responsible for the first checkpoint asked me if I had a rosary for her, since she was also a Catholic. I had one and gave it to her, after which, everything went smoothly, she accompanied me to register my visa, change money, and entrusted me to an employee to help me get my luggage without any problems". "Even in this short time I was able to convince myself that the people here communicate with one another, that daily life consists of simple things and that every novelty, no matter how small, is noticed and discussed", he continues.
Therefore, after the Mass celebrated in the chapel of the SMA house, which is also attended by the people of the neighborhood, I went out and realized that everyone knew me, they greeted me with 'père David', considering that here we are in town; imagine what it is like in villages!". Father Camorani also remembers attending Sunday mass in the parish of Saint Pierre in the heart of Bangui.
"The mass was celebrated in Sango, the national language of the Central African Republic, and since I did not understand the language, I only helped a little. What I understood very well was the music", he emphasizes. "As I listened, I thought that music really was an extraordinary, universal language and that preaching the gospel in such an engaging and sparkling way could not leave anyone indifferent."
I started a language course in Sango to prepare for my assignment in Monassao, a few hundred kilometers from Bangui, where French is hardly spoken and knowledge of the local language is essential", he affirmed. "At the moment - concludes the missionary - I can only celebrate Mass in French, including the homily. The day I manage to celebrate in Sango means that I am ready to leave and continue learning on the spot because, you know, languages are learned by speaking". (MP/AP) (Agenzia Fides, 19/10/2021)