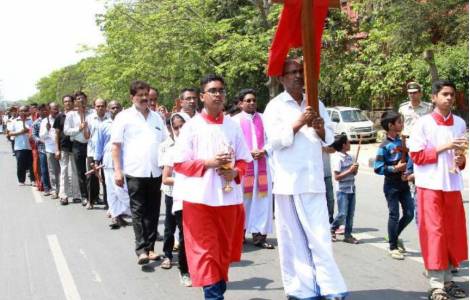 Bangalore (Agenzia Fides) - The Christian churches are critical of the plans of the government of the Indian state of Karnataka to conduct special research and collection of data on the activities of missionaries and employees of Christian churches. Msgr. Peter Machado, Archbishop of Bangalore, the capital of the vast state of southern India. On October 13, the government body "Backward Classes and Minorities Welfare", which deals with the promotion and development of disadvantaged groups, ordered a survey of the staff of the Christian Churches operating in Karnataka. Christians emphasize that there is no reason for this and fear ulterior motives.
"Why is the government only interested in a survey of religious personnel and places of worship in the case of Christian communities?", asks Msgr. Machado.
"We consider this approach pointless, unnecessary and dangerous", he said. "We consider this approach pointless, unnecessary and dangerous," he said. Nothing good will come of it. Against the background of the specter of the alleged forced conversion and the increasing anti-religious sentiment, it is indeed dangerous to conduct such surveys and they could easily become a target. We have already heard of sporadic incidents in the north and in Karnataka", he says in a statement sent to Fides.
"The missionaries work for the good of all people in the state. The government and everyone else are well aware of this. Nobody lives or works in secret. The work can be seen. We do not understand the purpose of such religious profiling of Christians and their institutions", explains the Prelate. "The government should count the educational institutions and health centers run by Christian missionaries. This would give a fair idea of the service the Christian community renders to society", he added. The survey on the missionaries is seen as part of a plan sponsored by the ruling pro-Hindu Bharatiya Janata Party (BJP) to implement a pro-Hindu political agenda that targets Christians and Muslims, religious minorities in India. Christian leaders recall that the faithful in Karnataka are facing targeted violence and persecution. In some cases there are violent interruptions of prayer services and demolition of Christian homes. Such attacks are often carried out by radical Hindu groups who, with the support of the government and the police, usually go unpunished. The state government had previously announced that it was considering passing a bill in the state parliament to ban religious conversion. The Catholic bishops of Karnataka then met for talks with Prime Minister Basavaraj Bommai and expressed their concerns on the matter (see Fides, 24/9/2021), inviting the executive to "put pressure on fundamentalist groups, who wish to disturb the peace, harmony and peaceful coexistence in society".
Eight Indian states have already passed such laws banning religious conversions. These laws, the Churches note, contradict the spirit of the Constitution, which guarantees the freedom to preach, practice and profess one's religion. In Karnataka, 84% of the 61 million people are Hindus, while Muslims make up 13% and Christians 2% of the total population. (SD-PA) (Agenzia Fides, 19/10/2021)