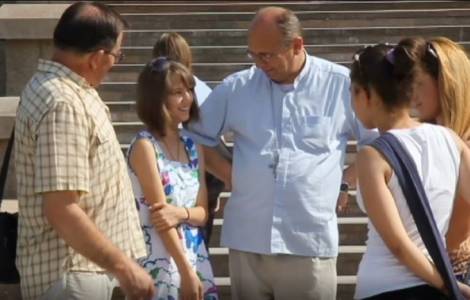 Vatican City (Agenzia Fides) - "The Church in Central Asia is experiencing a special situation which, perhaps precisely because of its uniqueness, can encourage new forms of mission. The Pope, in Evangelii Gaudium, spoke of 'missionary creativity': a digital meeting like this, which brings together the members of the Central Asian Church, can represent a useful tool to identify new forms of mission suitable for such a specific context". This is what Archbishop Giampietro Dal Toso, President of the Pontifical Mission Societies (PMS), highlighted at the conclusion of the webinar "The mission of evangelization in Central Asia in times of the Evangelii Gaudium. Context, difficulties, perspectives". The event was organized by the Pontifical Missionary Union on October 12 and 13, as part of the awareness and formation activity promoted by the PMS (see Fides 6/10/2021).
During the two days of discussion and exchange of experiences, aspects and experiences of the missions in the Central Asian region - which includes Kazakhstan, Kyrgyzstan, Tajikistan, Turkmenistan, Uzbekistan - and neighboring countries such as Mongolia and Afghanistan, were examined. The participants had the opportunity to talk about the specific situations and challenges of the Church in the various realities and to discuss issues common to the various countries. Above all, what emerged was the condition of a "small flock" or being a minority in contexts with an Islamic majority (or Buddhist in the case of Mongolia), the enormous linguistic variety and the need to allow to penetrate and harmonize the Gospel message in ancient and rooted local traditions. The urgency is to open up to these cultures and find the right balance in order not to lose the path. In this sense, the intervention of Mgr. Adelio Dell'Oro, Bishop of the diocese of Karaganda, is significant, who pointed out: "We need to understand if we have a clear direction for the development of the Church or if we are confused and continue the same motionless pastoral care as always. When the locals come to ask us how to walk, they need to be guided through a clear route, or they will be disappointed".
At the same time, Archbishop Dell'Oro recalled, "the Pope has given us a great instrument, the Apostolic Exhortation "Evangelii Gaudium", which traces a direction for the new evangelization by indicating joy as a way of witnessing", entering the history and local culture and avoiding individual and sentimental devotions.
It is a call to renew the announcement, also through common projects that can create a meeting space, "doing one's best to work as one family and carry out the mission of the church", underlined Fr. Tadeusz Nowak OMI , Secretary General of the Pontifical Society for the Propagation of the Faith.
The fruits of this work, concluded Mgr. Dal Toso, can be collected over time: "Bringing the Gospel into cultures other than ours does not mean simply learning languages or finding words and images to make oneself understood, but it also means committing oneself so that the culture that receives Christianity can slowly welcome it and change it. As Pope Francis reminds us, it is important to work for a fruitful encounter between faith and culture, that is, between what we believe in and the culture of a people that needs to enter the mystery that we announce. The mission experience in these countries teaches us that it is a very long process that requires patience. God asks of us for a long time but which, in his will, will bear fruit".
Catholics represent a minority in Central Asian countries: it is, in fact, a geographical area with a Muslim majority, where the Church was reborn following the fall of the Soviet Union and the consequent end of religious persecutions. To date there are 70 parishes in Kazakhstan, 5 in Uzbekistan, 3 in Kyrgyzstan, 2 in Tajikistan, while in Turkmenistan the approximately 250 faithful gather in the chapel of the Transfiguration of the Lord, in the capital Ashgabat. (LF-PA) (Agenzia Fides, 14/10/2021) 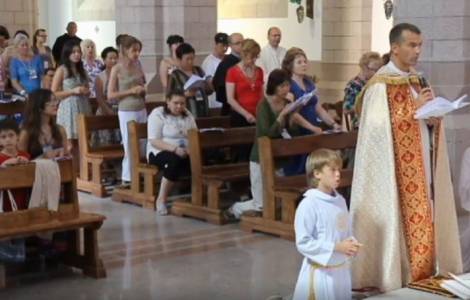 OCEANIA/PAPUA NEW GUINEA - Priority to the missionary formation of children