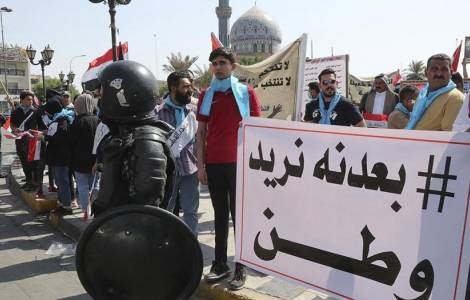 Baghdad (Agenzia Fides) - While Iraqi citizens are preparing to go to the polls to elect the 329 members of the new Parliament, the Chaldean Patriarchate joins its voice to that of the Grand Ayatollah Ali al Sistani, who previously underlined the urgency and the opportunity to honor the electoral appointment on the agenda for Sunday, October 10. In a statement signed by Chaldean Patriarch Luis Raphael Sako, mentions the previous appeal of the Shiite, Grand Ayatollah, calling him "the Supreme Guide", who had exhorted the Iraqi population to "conscious and responsible participation" in the vote, indicating it as "the most sure way to direct the country towards a better future".
In the message signed by Cardinal Sako, the elections are indicated as a useful tool to try to carry out the institutional, political and administrative reforms required in recent years, also through massive non-violent popular mobilizations. "We invite voters" reads the patriarchal communiqué, "to evaluate the behavior of the former representatives who return to the elections and of the new candidates, so as not to be deceived by deceptive promises and not to sell the country to opportunists and corrupt". Parliamentary elections will be held with votes to be cast in 83 multi-member constituencies. A quarter of the total 329 seats are reserved for women, while 9 seats are reserved for minorities (5 for Christians and 1 each for Yazidi, Shabak, Mandei and Kurdish feili, Iraqi Shiite Kurds who are part of the Kurdish population, almost totally Sunni, concentrated in Iraqi Kurdistan).
According to surveys carried out at the time of the presentation of the lists, the Christian candidates in the running for the elections are at least 34 (see Fides, 15/5/2021). The electoral propaganda activities of Christian candidates have been concentrated in areas with greater Christian population, such as the city of Dohuk. At the end of July (see Fides, 30/7/2021), the Party of the sons of two rivers (Beth Nahrain), a political group that brings together leaders and militants from Iraqi Christian communities, had officially announced its intention to boycott the next Iraqi parliamentary elections, scheduled for next October 10. "The Iraqi political forces, including us - reads the text, with implicit references to the excessive power of the sectarian militias and the bloody repression of the 2019 demonstrations - had asked weapons to be exclusively in the hands of the State, killers of demonstrators to be insured to justice and the issue of the fight against corruption to be resolutely tackled". Unfortunately - the Beth Nahrain leaders added - none of these requests have found adequate answers, and it is easy to predict that the electoral process will also take place in conditions in which sufficient transparency and fairness are not guaranteed". The system of "quotas", currently in force, which reserves 5 of the 329 parliamentary seats for members of the various Christian communities, in the opinion of the leadership of Beth Nahrain will continue not to favor adequate political representation of the Christian components, because in its current form it makes possible electoral manipulation operations which in recent years have already allowed the major parties to have those seats assigned to their own emissaries. The mechanism of these electoral manipulations is quite simple: in the 2018 elections - recalls the statement - the largest parties hijacked thousands of votes of their militants to support candidates who were loyal to them competing to win one of the 5 seats reserved for the Christian component. (GV) (Agenzia Fides, 8/10/2021)