ASIA - Evangelization in Central Asia in times of Evangelii Gaudium: webinar of the Pontifical Mission Societies 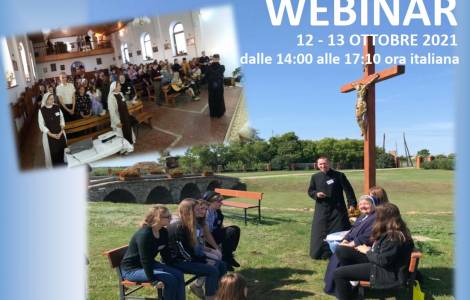 Vatican City (Agenzia Fides) - "The mission of evangelization in Central Asia in times of Evangelii Gaudium. Context, difficulties, perspectives": is the title of the webinar organized by the Pontifical Missionary Union on October, 12 and 13, within the awareness-raising and formation activity promoted by the Pontifical Mission Societies (PMS). The webinar, free and open to everyone, will be in Italian and English and will be held in two sessions, from 2:00 to 5:00 pm Italian time, on the online "Kudo" platform.
On October 12, after the opening greeting of Msgr. Giampietro Dal Toso, President of the PMS, the first report entitled: "The mission in Central Asia in the third millennium will take place. A brief reflection based on historical data and pastoral experiences", offered by Msgr. Adelio Dell'Oro, Bishop of Karaganda (Kazakhstan). This is followed by the first exchange of experiences, on the theme "Celebrating 30 years of presence in Uzbekistan. Fruits and challenges of missionary activities in Uzbekistan" entrusted to Msgr. Jerzy Maculewicz, Apostolic Administrator of Uzbekistan. After a period of debate, it will be the turn of the second testimony on "The pastoral missionary realities of Kazakhstan. Promoting the proclamation and the life of faith", to be carried out by Msgr. José Luis Mumbiela Sierra, Bishop of the Holy Trinity in Almaty, Kazakhstan, which will be followed by a talk on the role of the Pontifical Mission Societies in Kazakhstan in support of the mission, by Fr. Leopold Kropfreiter SJM, National Director of the PMS in Kazakhstan.
For his part, Fr. Tadeusz Nowak OMI, General Secretary of the Pontifical Society for the Propagation of the Faith (POPF), will also provide practical indications on how PMS can support missionary projects in Central Asia.
The second training session, centered on "The challenges of evangelization in Kyrgyzstan" will be given by Fr. Anthony James Corcoran SJ, Apostolic Administrator of Kyrgyzstan, followed by an excursus on "The missio sui iuris in Afghanistan", by the Barnabite, Fr. Giovanni Scalese, responsible for the Missio sui iuris in Afghanistan.
To conclude the day, Sister Roberta Tremarelli AMSS, Secretary General of the Pontifical Society of the Holy Childhood (POSI) will give the present practical indications on missionary projects dedicated especially to children in Central Asia.
The following day, October 13, the program opens with the report on "The missionary between the evangelical proclamation and charitable activity. Some provocations from the Bible and Evangelii Gaudium", by Father Dinh Anh Nhue Nguyen OFMConv, Secretary General of the Pontifical Missionary Union. This will be followed by an exchange of experiences on "The mission in Mongolia. Analysis and perspectives", illustrated by Msgr. Giorgio Marengo IMC, Apostolic Prefect of Ulaanbaatar, in Mongolia.
After the debate, Msgr. Yevgeniy Zinkovskiy, Auxiliary Bishop of Karaganda (Kazakhstan) will speak on "The initial and ongoing formation of missionary priests in Central Asia. Overall context and challenges"; This will be followed by a communication on the support of the Pontifical Society of Saint Peter the Apostle (POSPA) for Central Asia, by Fr. Guy Bognon PSS, Secretary General of POSPA. The subsequent exchange of experiences will focus on "La Missio sui iuris in Turkmenistan", which will be discussed by Fr Andrzej Madej OMI, superior of the Missio sui iuris in Turkmenistan. Finally, Fr. Dinh Anh Nhue Nguyen OFMConv, Secretary General of PUM and Paolo Affatato, responsible for the Asia section for Agenzia Fides will highlight the role of PUM, Agenzia Fides and the International Center for Missionary Animation for Central Asia.
To participate in the webinar: the link to connect on the first day (October 12) is: https://live.kudoway.eu/ad/220217242516;
The link for the second day of the webinar (October 13) is: https://live.kudoway.eu/ad/220215721353. (PA) (Agenzia Fides ,6/10/2021)