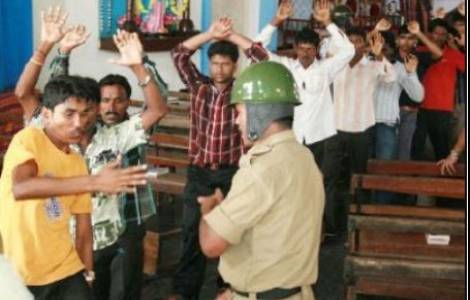 2022-01-25
Statue of St. Sebastian destroyed in a Catholic church in Tamil Nadu

New Delhi (Agenzia Fides) - In just one day, October 3, at least 13 episodes of violence and threats were committed by members of radical Hindu groups to the detriment of Christian communities in the states of Uttarakhand, Haryana, Uttar Pradesh, Chhattisgarh and Madhya Pradesh and New Delhi, the country's capital. This is what Fides learned from the Commission for Religious Freedom of the "Evangelical Fellowship of India" (EFI), an organization that brings together communities and denominations of Christian evangelist groups. In the various incidents, shouting slogans praising the Hindu god Ram, angry crowds beat the faithful gathered in prayer, destroyed furniture, photographs and musical instruments, devastating several halls of worship, Christian leaders say.
"We unequivocally condemn the deplorable attacks on Churches and Christians. The members of the Sangh Parivar (Hindu extremist group) responsible for these criminal actions must be brought to justice immediately and receive adequate punishment, so that they stop indulging in violent and unconstitutional activities", Jesuit father Cedric Prakash, promoter of human rights and religious freedom told Fides. "Nobody has the right to use the law as they please. Moreover, according to the Constitution, every citizen has the fundamental right to freely preach the religion of their choice", he explained. The Jesuit notes that in the northern areas of India" violence is growing: the victims are always religious minorities and marginalized communities, such as farmers and or dalits".
According to the list sent to Fides by EFI, the physical and psychological violence (with allegations of conversions) perpetrated on October 3, are the following: in Maharajganj, Uttar Pradesh, Pastor Durgesh Bharti was leading a prayer meeting in the home of other Christians in the village of Nasirabad. Some fanatics arrived and started to mistreat and threaten them. After a while they called the police. The police arrived and took Pastor Durgesh into custody at the Police Station in Paniyara.
In Jaunpur, Uttar Pradesh, Pastor Prem Singh Chauhan was arrested: there was a false report of forced conversion against him. In Hasanpur Baru Village, Hathras District, Uttar Pradesh, Pastor Suraj Pal was informed by the Police Station in Sadabad that a forced conversion complaint had been filed against him.
After an interrogation, the Pastor was released as the allegations were deemed unfounded. In the village of Chak Gordhan, Bijanaur, also in Uttar Pradesh, Pastor Dinesh, after concluding a Sunday prayer, was returning home. On the way he was stopped by two policemen who ordered him to show up at the local police station the next day. In Maharajganj, in Uttar Pradesh, the prayer meeting of Pastor Shrinivas Prasad was interrupted by violent elements. A Christian girl was also attacked and beaten. In Azamgarh, in the same state of Uttar Pradesh, Pastor Nandu Nathaniel and his wife were arrested under the "Anti-conversion Law" of Uttar Pradesh, based on a complaint filed by people living near their hall of worship.
In the state of Chhattisgarh, in the village of Kusumi, some Christians were attacked twice by the villagers: once in the morning and another in the afternoon, according to information from the "Chhattisgarh Christian Forum". The villagers entered the small room used as a chapel, devastated it and beat a 12-year-old boy who was inside. In Bhilai, also in Chhattisgarh, Pastor Santosh Rao was summoned to the police station, where he was accused of having made an illegal religious conversion.
In Karnal, in the state of Haryana, a Christian woman and about 25-30 other faithful were attacked by members of an extremist group during a Sunday liturgy. They were threatened, beaten, put to flight and the house where the Christians were praying was ransacked.
In Roorkee, Uttarakhand, about 500 extremists broke into a hall where 15 faithful were gathered for Sunday prayer. Both women and men were attacked and beaten by extremists. Five Christians were injured and one of them, Rajat Kumar, is in critical condition. In Jwalapur, in Uttarakhand, radical Hindu groups, also accompanied by some police officers, interrupted a religious service, threatening the Christians present.
Vipin Kumar, Pastor of the community, reported that the faithful are frightened and have not filed a complaint.
In Hoshangabad, in Madhya Pradesh, some extremists accused Christians of converting people to Christianity. Finally, in Asola Fatehpur Beri, in the area of the capital New Delhi, 12 men went to the home of Pastor Santosh Dan and threatened him for announcing the Gospel, accusing him of trying to convert people through deception or illicit means. They told him not to let any Hindus into his house for any reason. (SD-PA) (Agenzia Fides, 5/10/2021)