AMERICA/PERU - La Voz de la Selva, the Catholic radio that listens and spreads the cry and hopes of the Amazon 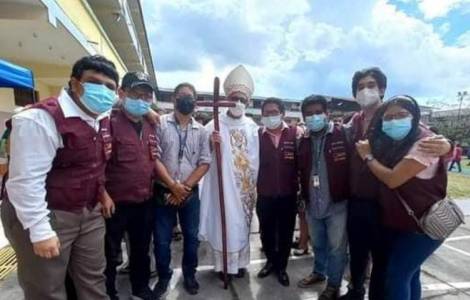 2021-11-08
The Church for the Bicentenary: the participation of the Church in independence and nation building

Iquitos (Agenzia Fides) - "We are honored for the recognition of this award and at the same time we feel committed to pursuing the same line as our leader, Oraldo Reátegui director, presenter and press officer of the Amazonian radio station La Voz de la Selva , who died due to Covid-19 on July, 1". This is how Rubén Meza, in charge of programming the station, who has been a part of the station for many years, reports the news of the award assigned to the Radio.
From the note sent to Fides by the Centro Amazónico de Antropología y Aplicación Práctica (CAAAP) it is clear that, on the occasion of the national bicentenary, on October 1, Journalist's Day, the Association of Journalists of Peru recognized the work of almost half century of the radio station of the Apostolic Vicariate of Iquitos with the Willah Kamayuc, recognition for the practice of journalistic values in its informative work.
On April 14, 2022, La Voz de la Selva will celebrate 50 years since its creation, years of work in search of truth and justice. "The name of this station is in itself its motto, its battle cry, because the man and woman of the Amazon know that these microphones are there to hear their voice, their requests, but also their joys and hopes", says Meza. "The challenge is to continue to demonstrate that we are different. A radio belonging to the Catholic Church, which, as indicated by the bishop of Iquitos, Msgr. Miguel Ángel Cadenas, is the social voice of the Church. "In this historical context, more than ever, responsible journalism has been essential to keep the population informed and explain not only the data, but also what is known about Covid-19 and its symptoms", Reátegui used to say.
The social focus of the radio also played an important role. From La Voz de la Selva, the solidarity campaign of the Apostolic Vicariate of Iquitos was promoted to raise funds thanks to which it was possible to purchase four oxygen plants to help those who needed it most to deal with the pandemic.
The Amazon broadcaster was founded in 1972 from the merger of two radios that belonged to the Catholic Church: that of the Apostolic Vicariate of San José del Amazonas, based in Indiana, and the one in the city of Iquitos, belonging to the Apostolic Vicariate of Iquitos. (AP) (Agenzia Fides, 4/10/2021)