AFRICA/SOUTH SUDAN - Mission is what unites the different expressions of the Church: the bishop of Tombura-Yambio urges the protection of priests and religious 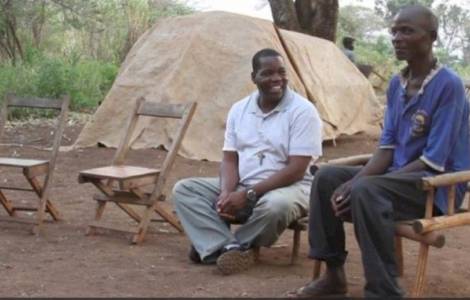 Tombura-Yambio (Agenzia Fides) - In recent months, the county of Tombura has been the victim of violent clashes between the two rival forces which has led to the mass displacement of hundreds of families (see Fides, 22/9/2020).
Almost 15% of the local population is involved in the serious episodes of violence that rage throughout the country and in particular in the diocese of Tombura-Yambio. "Violence, murders, hatred, distrust, mass displacements have progressively increased the level of our poverty to 97% if not 100%", said to the faithful Msgr. Eduardo Hiiboro Kussala, bishop of the diocese in a heartfelt appeal sent to Fides.
"Priests, religious, catechists, seminarians, ecclesiastical staff and more come from those ethnic communities that now inhabit our diocese. How will they behave or relate in the midst of so many ambiguities? In such a climate of distrust, how can we address members of our own ethnic community without being suspected or vice versa, not be hated or distrusted by members of other ethnic groups?". The prelate has drawn up an actual 'Orientation' in which he emphasizes that the love of God has no boundaries. "We need God in our lives and we must entrust ourselves to Him as His true believers! We must be builders of bridges between our ethnic communities! Let's all arm ourselves with prudence!", said Hiiboro to the priests, religious and personnel of the diocese. Speaking instead to the entire population, the prelate urges them to protect, respect and help priests and religious from all dangers and to contact the competent ecclesiastical authorities before publicly accusing anyone. Likewise, the bishop encourages priests to avoid occasions that can feed perplexity. "Who are we as South Sudanese? Before, during and after our independence in 2011 we never openly discussed the controversial issues. We have never decided what kind of South Sudanese society we want. This is why society today is shaped by ethnicities, negative politics and other false or parasitic alliances! We are reaping the rewards of all the terrible things we have suffered or left unresolved. To all of us believers I launch my appeal to protect our church! The role of the church in our society is grace! I ask you to help me protect our priests, religious, catechists, seminarians, staff and all the staff of the church!"
"Priests and religious are not angels, they are human and vulnerable, we make mistakes. Any kind of problem must be addressed. We must create an environment in which everyone has the freedom to be what he wants, according to the law of his country or what his conscience requires. What unites these different expressions of the Church is the mission of the Church and her vision of her development", concludes Msgr. Hiiboro. "The vision of peace and development is rooted in the intrinsic dignity of all people as made in the image and likeness of God, having equal value. It is a vision of a transformed world that reflects the Kingdom of God, where all people, ethnicities, communities and the earth can thrive and where all people and institutions work for the common good. (HK/AP) (Agenzia Fides, 1/10/2021)